How to keep cool in Quebec City 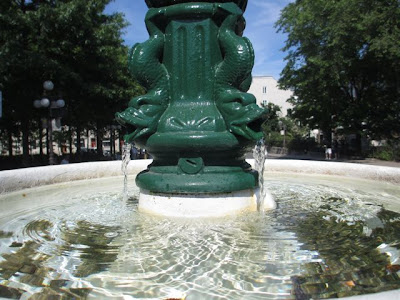 I'm not a great tourist at 38C. I get frustrated schlepping along behind people in shorts so I've been sussing out the best places to go and cool off in Quebec City without shopping. (well it was only one dress)

Notre-Dame Basilica Cathedral on Rue de Buade is the perfect spot to get out of the sun and spend a while. Refreshingly there is no entrance charge (donations only) or signs telling you not to take photographs. There has been a basilica on this site since 1647 although it has been twice destroyed by fire.

The Marché du Vieux Port or Old Port Market is good for picking up picnic goodies and saving money on restaurant meals. As well as fruit, vegetables and cheeses there are some great local products such as cassis from the blackcurrants of Isle D'Orleans (5km away), apple ice wines, apple pies and apple butters. Plus it's all in the shade.

Museums are usually a welcome blast of air conditioning while picking up some culture. At the Plains of Abraham I sat in darkened rooms and watched multi-media presentations on the battles that took place here between the French and British empires. I found this Odyssey exhibit a little cheesy but good for kids. The Museum D'Amerique Francaise, the Musee des Beaux Arts (Fine Arts) and the Museum of Civilisation all come highly recommended.
On a clear day head for an unimpressive looking tower block at 1037 Rue de la Chevrotiere and take the lift to the 31st floor. The Observatoire de la Capitale (observation tower) is an indoor chance to get a 360 degree view of the city. Good for orientation, photographs and cold, cold air.
You're never too young to enjoy the view. I went up in the morning and could see the Changing of the Guard at the Citadel (more tomorrow). There's also a good exhibition about Quebec's recent history as you walk around the floor.
Back out into the heat and searching for more shade I stumbled across a jewel of a museum which proves my theory that it doesn't matter what the subject, if a museum is designed well it will always be fascinating. The Ursuline sisters were the first Catholic nuns in the New World. They played a major role in the education of girls and the history of women in Quebec. The Musée des Ursulines tells their story.


The museum is light and airy with beautifully put-together exhibits. You can listen to the recollections of women who were sent to boarding school to be educated by the nuns. On headphone sets you can hear them talk of their first day away from home and how they were only allowed to see their families from behind a metal grille. Fascinating stuff. After spending a very pleasant hour in the museum I felt rested, calm and cool and ready to face the heat again. It had been a refuge from the bustling streets. A real treat. There is a chapel and garden tours too - all of which were hidden from the world until 1936. Your museum is absolutely lovely, I say to the chap behind the desk. Yes, I know, he says.

For more info on Quebec City Bonjour Quebec and Quebec City
Read next blog post
Subscribe to this blog by email - just hover your mouse over the hidden boxes on the top right of the page. Put your email address in the bottom box.

Email Post
Labels: Observatoire Quebec City Quebec Opera Festival
Anne Kostalas
"There are two things I love in life - travel and opera. Which is probably why I write a blog on each of those subjects. I'm a filmmaker, former BBC journalist, cottage dweller, gardener and cat lover. I make documentaries, profile videos of individuals and companies as well as trailers for productions and festivals. Check out my other blog Diva Films: My life as an operatic filmmaker and my website annekostalas.com. Follow @viewfromalake on instagram and twitter."