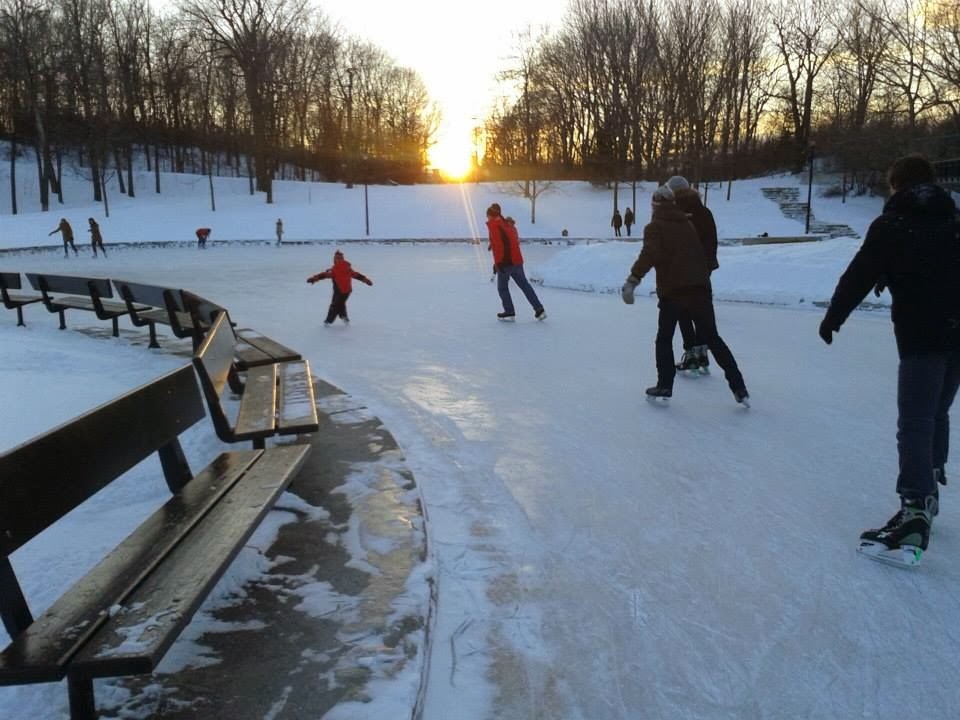 It's been a long harsh winter here in Montreal….er hang on a minute but it's only January. No point in complaining about it. I am one of those annoying - Get outside and enjoy it- kind of people. You don't have to be an expert at winter sports to participate in this Winter Wonderland. Coming from England I was lucky enough to live near an indoor ice rink where I learned to skate. Of course it was full of rough lads trying to scare you as you skated but I still managed to pick up a few skills. Fast forward several decades and those skills still manage to keep me upright on a rink and have enabled me to enjoy many hours whizzing around on skates this winter. My favourite rink is the one above at Lac aux Castors.

It's great for many reasons - the location in beautiful Parc Mont Royal, the music (sometimes classical) they play as you skate, the pretty fairy lights at night and the views of other wintry activities going on around you. As you go round and round the refrigerated rink you can see families tobogganing down the hill, skiers on trails in the woods and hear the tinkling bells of the horse-drawn sleigh rides. It's all terribly Dr Zhivago-esque.  But other favourite ice rinks in Montreal would be Parc La Fontaine with its winding course and nearby La Banquise poutine resto and the Old Port with its view of Old Montreal and the silver-topped Bonsecours Market. If you have your own skates you can use the rinks at the parks for free but you pay at the Old Port. 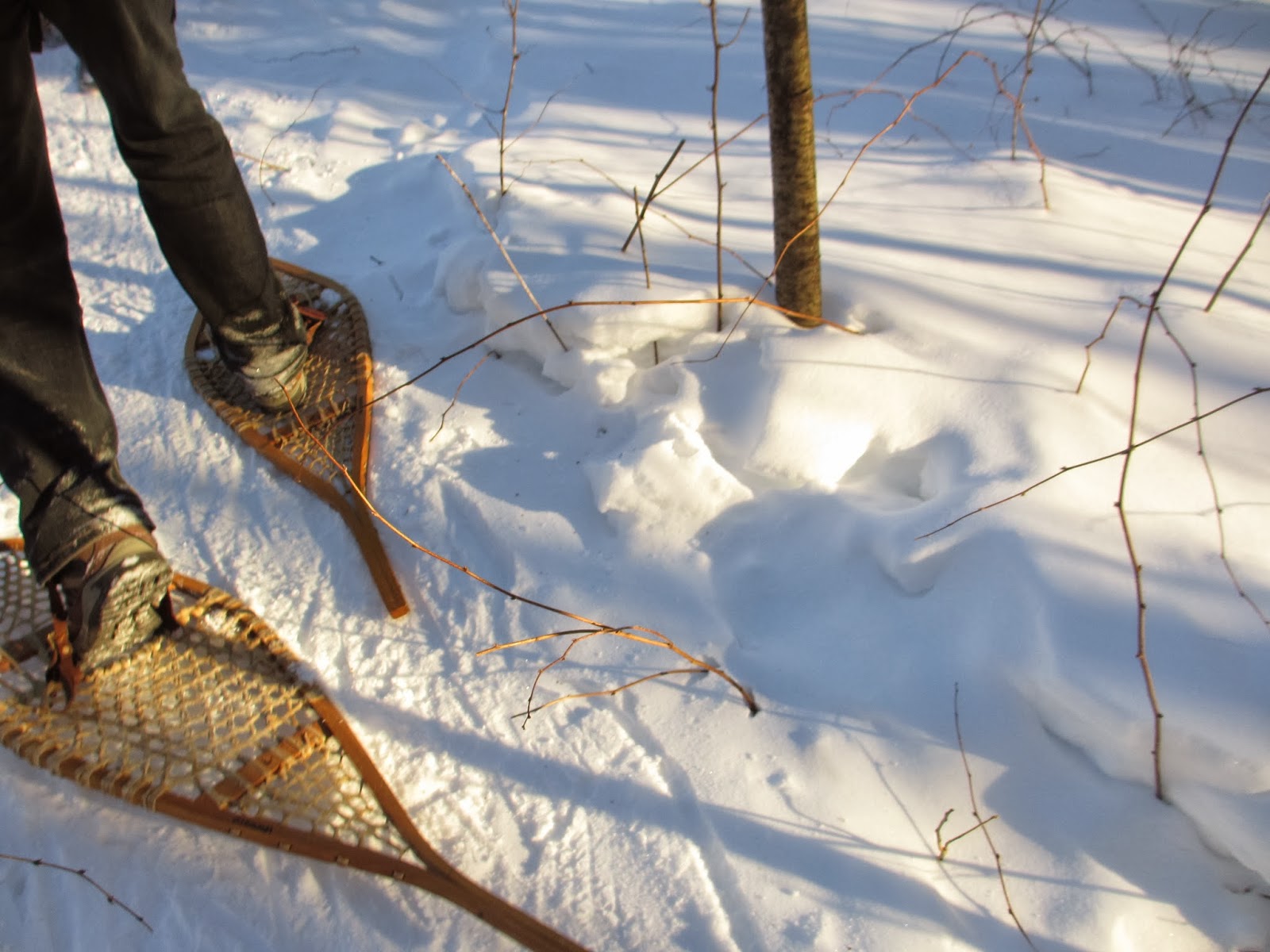 If the thought of wobbling on skates is too much for you (man up will you) then you could go snowshoeing.  This is a system of strapping large devices to your feet which prevent you from sinking through deep snow. They used to look like tennis rackets (see pic of husband's feet above) which is why the French call them raquettes. The modern ones are lighter, thinner  and easy to use and you can even run in them with ease. (not recommended for jogging though)
Plenty of places to go snowshoeing - the sunset above was taken while on a trip to Mont Saint-Bruno - just a short drive outside Montreal where we yomped through the woods and fed a white breasted nuthatch from our hands. Also the Friends of the Mountain do moonlit snowshoe trips with hot chocolate reward on the trails in Parc Mont Royal. We hope to do this soon and the Pavilion on the mountain has a very good bistro where you could have dinner afterwards. They are open Friday and Saturday nights only so call them first.


Another really easy winter activity is cross-country skiing. If I can do it anyone can do it. It doesn't take long to get the hang of it and like skates and snowshoes - equipment if available to hire just about everywhere. Here we are below XC skiing on one of my favourite routes Le Petit Train du Nord. Weird name I know but as it is a former railway line through the Laurentians it makes sense. Can you guess why I like it? Because it's FLAT. A great benefit if you are not terribly expert. I love XC skiing as it is so sociable - you can chat to you friends and ski along side each other if it's not too busy. Also not a lot of injuries compared to downhill. Very good exercise too and I always feel terribly Canadian when I do it. Yet the activity arrived here late and originated in pre historic times in Scandinavia when they used to hunt moose by ski.

I don't downhill ski but for Brits Mont Tremblant is a great alternative to going out west (and 3000 miles closer to Britain). You might even see Michael Douglas at Tremblant as he has a place there. He has very strong connections to Quebec as his cancer was diagnosed and treated by a Montreal doctor.  Our friends were skiing at Tremblant but took a break to XC with us below. It was close to -30C with windchill and on this day my hair froze into white strands. Sort of Worzel Gummage-like. It's not always this cold in winter but if it is - wearing good gloves and socks is essential and maybe bring some handwarmers.


There are some Montrealers who complain about the winter but there are many, many more who get out there and confront it head on and have a lot of fun in the process. There is often snow on the ground from December through to April so really why not make the most of it?

Read more of my wintry posts starting here (How to dress for a Montreal winter) and don't forget to leave a comment.
Read another post on Winters in Canada
PS if you're wondering where this blog has been -  I have been busy in my other life as a video producer making some really fun videos with Opera McGill and Atelier lyrique. Want to have a sneaky look at them? Go here

Email Post
Labels: canada cross-country ski ice skating Mont Royal Montreal Quebec snowshoeing Winter
Anne Kostalas
"There are two things I love in life - travel and opera. Which is probably why I write a blog on each of those subjects. I'm a filmmaker, former BBC journalist, cottage dweller, gardener and cat lover. I make documentaries, profile videos of individuals and companies as well as trailers for productions and festivals. Check out my other blog Diva Films: My life as an operatic filmmaker and my website annekostalas.com. Follow @viewfromalake on instagram and twitter."