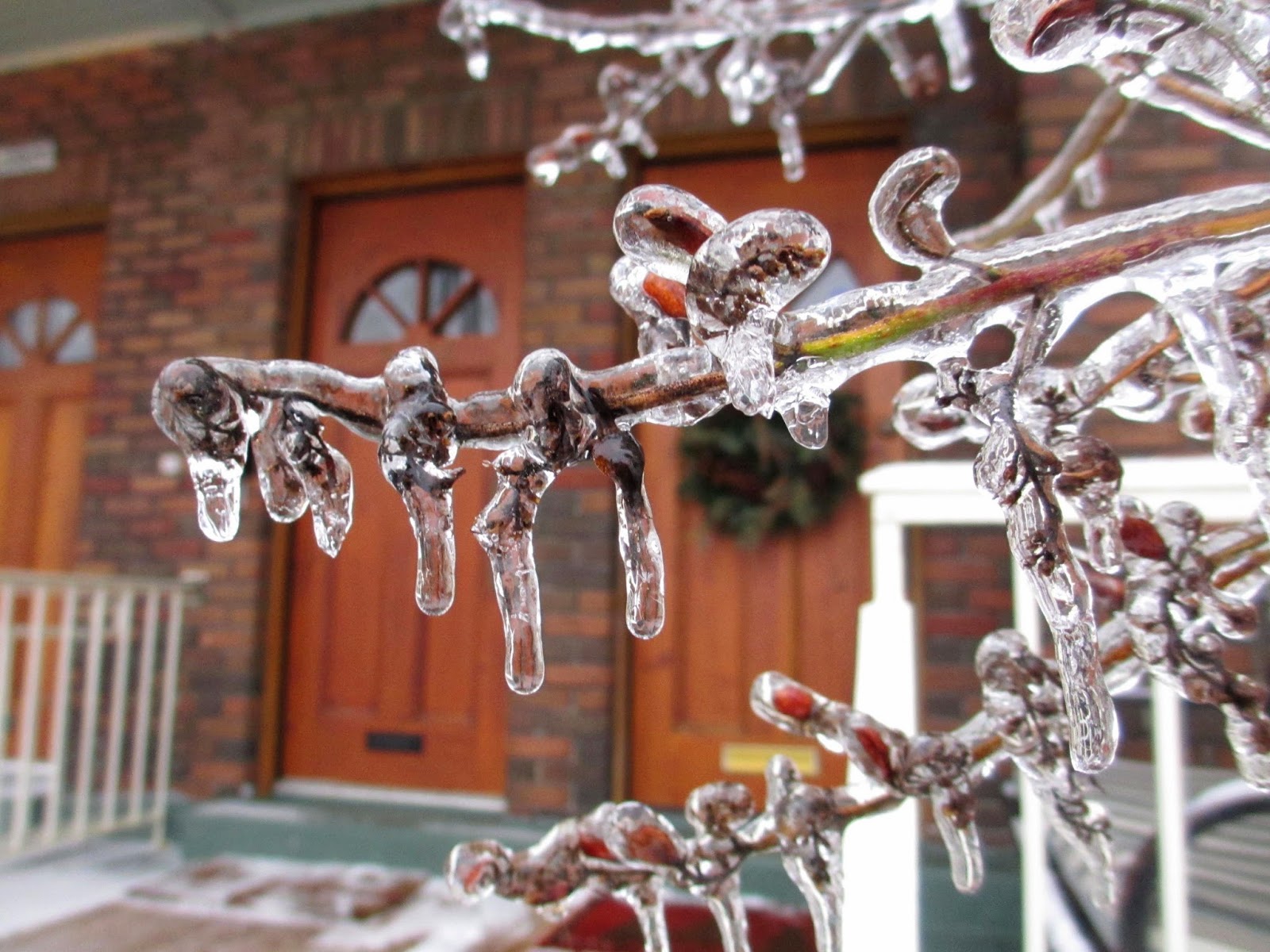 This is my seventh winter in Montreal and I thought I'd share a few things I have learnt over the years :
1. We have things called ice storms. I think this is a misnomer really as it suggests ice falling from the sky. Alternate names such as a glaze event or a silver thaw are probably more accurate (though a bit silly). Rain turns to ice and officially it's an ice storm if there is more than a quarter of an inch of ice on surfaces. What is amazing to me is that it forms around everything such as these spruce needles below. It makes for great pictures but treacherous walking conditions. I took these pictures on a walk around the block. We were exhausted on returning home as just keeping upright takes all your skills. Every inch of ground is ice - there are no dry patches to hop on to.


2.  I have the wrong feet for Canadian boots. I have learnt this the hard way. I own two pairs of high end winter boots. The type everyone tells you to buy. They are both waterproof and warm but they also make my feet bleed. I can only imagine I have some sort of weak, soft, Downton Abbeyesque feet like those of English ladies in years gone by. Yes I have tried wearing extra socks - for all you Canadians who are saying this now. But the result is a mess of scars and sticking plasters and I have abandoned both expensive pairs. Now I am wearing what I call old lady boots. I went for short ones by Pajar and they are doing a fine job with no paramedic assistance needed.

3. Never ever take off your mittens. Also learned the hard way. A recent fall in the metro station and a finger which ended up pointing the wrong way, ie backwards, has taught me a lesson. Firstly if you are going to faint at the sight of your own finger make sure you are near a kind person like the owner of the store in Villa Maria metro who called my husband and gave me a chair and water. Wearing thick mittens can protect you from all sorts of injuries in a fall. I wasn't wearing them. I am a fool.


4. Have a bag of gloves, hats and scarves in the car. Chances are clearing the snow off your car before a drive can leave you covered in the stuff yourself so avoid embarrassingly wet accessories by carrying spares in the car. (I usually wear the ugly car ones for the snow clearing and change back into the cool ones afterwards.) This bag of goodies is also useful if you have been doing winter sports and are sweaty, then stop moving to drive home and become frozen very quickly (like a human silver thaw in fact).

5. Dogs in coats make me smile. You are walking along the street in Montreal with your face half frozen. Your eyes are streaming with the cold. You are wondering why you emigrated here and then you see a doggie in a coat and booties. It makes everything right again. You won't believe this but I actually saw a dog in jeans, t-shirt and baseball cap in NDG once. Winter attire is even better.

6. It snows inside our car.  It is something to do with having a ten-year-old Subaru, having snow on your feet when you get in the car and then the car sitting in freezing conditions overnight. Don't ask me to explain it. I'm not a scientist. But what I do know is that as I am scraping the ice from the inside of our windscreen ( and my husband is swearing just an inch of visibility is enough for him to drive) I am getting covered in snow as said ice has no place to fall but on me. It's annoying. I've heard about leaving your car window open a crack to prevent this but not convinced.

7. Below -15C is when it starts to get cold. My friend, a teacher, tells me they were not allowed to send the kids out to play if it fell below -15C. Anything above this was fine. Isn't this fanstastic? But get this. The kids want to play outside when it's below freezing. School yards are filled with kids rolling in the snow and frolicking about as if they were in a summer meadow . This is how they train them to be Canadians.

8. You need 10 of everything. You cannot survive a Montreal winter with one scarf, one pair of gloves and a hat. It doesn't work. Instead you have grades of everything. At the start of the winter when it first feels cold you will wear your thinnest gloves (actually probably something like I wore in England all winter). Then you will switch to thin mittens as we all know mittens are warmer than gloves, right?  Then your warmest mittens in the bad weather (some even wear thin gloves with mittens on top). Meanwhile your hats have been taking a similar trajectory. A thin slouchie to start the winter moving on to a tuque for colder days and then the full fur-lined confection with ear flaps for the worst days. Scarves the same. Also in the scarf category I am including balaclavas and those neck thingies which cover you from the nose down and can protect you from a winter terror - frozen snot syndrome.

9. It's sunny. Montreal winters are very sunny. Sometimes this means it actually feels like -35C but at least the sky is blue. This is the one thing people forget when they moan on about Canadian winters. If you have a sunny room in your house you can pretend it's summer until you actually have to buy milk.

10. Windchill means something. In England my friends laugh at the windchill concept and maybe in England it is laughable. But here it means something. It means ten degrees. If it is -23C with windchill on top you know it will feel like -33C. This is your basic my-face-is-going-to-fall off kind of temperature. The kind when, as happened to me this week, you leave a coffee shop and they wish you good luck as you head back outside. You develop a skill here to be able to accurately state the temperature just from being out there. My husband likes to challenge me to guess the temperature with windchill when I return home. This has been elevated to the status of a winter sport in our house. 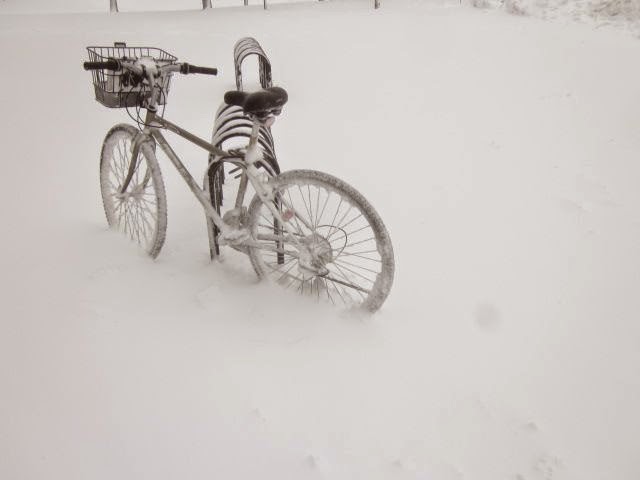 Previous advice about what to wear in a Montreal winter.

Other posts you might like: The ghost towns of the Canadian Badlands.
Shooting the Northern Lights.
Email Post
Labels: canada Montreal Winter
Anne Kostalas
"There are two things I love in life - travel and opera. Which is probably why I write a blog on each of those subjects. I'm a filmmaker, former BBC journalist, cottage dweller, gardener and cat lover. I make documentaries, profile videos of individuals and companies as well as trailers for productions and festivals. Check out my other blog Diva Films: My life as an operatic filmmaker and my website annekostalas.com. Follow @viewfromalake on instagram and twitter."