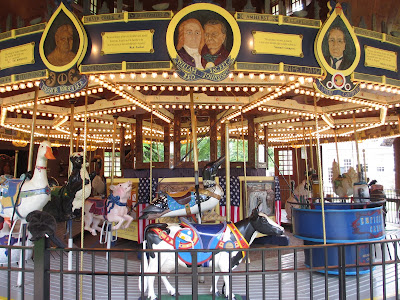 I'm riding on a black dog between a giant fish and a mule, my friend rides on a swan behind a skunk and a duck. We are giggling our way round and around on a summer's afternoon. Other folks (mostly adults I notice) are hanging off the backs of pigs and mice taking selfies. The Empire State Carousel is a glorious tribute to New York and a labour of love for almost a thousands artisans across the state. This beauty resides in one of favourite places to visit while staying in Cooperstown for the Glimmerglass Festival: the Farmers' Museum.

I've never seen a loon on a carousel before or a moose for that matter but this carousel is different thanks to Gerry Holzman whose came up with the original idea in 1983. All of the 25 hand-carved animals, including a wildcat, raccoon and deer. have a link to New York State  As well as the animals there are painted panels depicting the history of NY including portraits of Harriet Tubman, Eleanor Roosevelt and George and Ira Gershwin.  It's a treasure and the best way to see it is definitely to ride it. There's a great book about the making of the carousel in Todd's General Store in the historic village at the Farmers' Museum. The museum itself is not to be missed if you're in Cooperstown. We've been several times now and discover something new every time we go.

You can get a reduced price if you purchase tickets for two or three museums at once in Cooperstown. We bought the so-called two-way tickets which enabled us to visit Fenimore Art Gallery - over the road from the Farmers' Museum. We snicker at the name because we once arrived with a ticket to three museums at the Baseball Museum when my friend said to the guy behind the desk, "Hi we're here for the three-way." Moving on quickly I love that the art gallery often links up with the Glimmerglass Festival with opera-related exhibits. This time a fascinating look at Marc Chagall's costumes for the Magic Flute at the Met, an opera also showing here at Glimmerglass. Coincidentally we meet an opera lover at our BnB who tells us he saw these costumes in the original 1967 production. 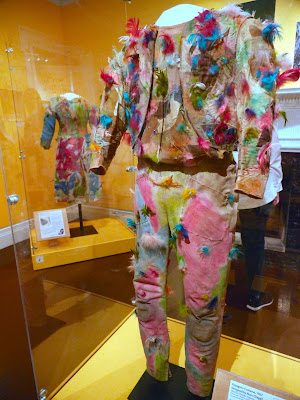 What a great contrast with the costumes of Papageno and Papagena in this year's Glimmerglass production of Mozart's classic. (see below). Opera director Madeline Sayet is a direct descendant of Chief Uncas, the last of the Mohicans as portrayed in James Fenimore Cooper's novel. She based this production of Magic Flute in the woods around Glimmerglass. Truly a Cooperstown production. Baritone and young artist Ben Edquist produced many laugh out loud moments in this comedy and we especially liked tenor Sean Panikkar as Tamino and young artist, soprano So Young Park got many well-deserved bravas after THE Queen of the Night aria.


You've probably noticed a close link between music and food in these blog posts and so you will not be surprised to know I am going to wax lyrical about another restaurant closely associated with Glimmerglass. In over-the-top operatic style I am even going to say it is one of the best I've ever set foot in. The Rose and Kettle in Cherry Valley has close ties to opera - many of the performers dine here after the shows. It was even recommended to me by the former director of the Young American Artist Program at Glimmerglass Opera (we raised a glass to you Patrick). While dining sometimes we stopped talking just to listen to the opera-talk from the other diners.

A delight of a resto, friendly service, unbelievable food, fine cocktails (rosebud margarita anyone?) and a great ambiance. We look up at one point when a fellow diner shouts "Hail Caesar". The talented countertenor John Holiday who sang the role of Julius Caesar in Cato in Utica, has just walked in for dinner. "Sing it all again for us," says my friend. Amid much laughter he graciously accepts our congratulations and wishes us a good evening. A perfect example of how to cope with fans when all you want to do is eat your dinner. 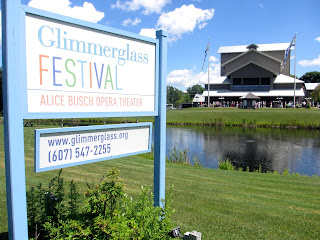 
Email Post
Labels: carousels cooperstown. baseball. glimmerglass. opera countertenor glimmerglass john holiday
Anne Kostalas
"There are two things I love in life - travel and opera. Which is probably why I write a blog on each of those subjects. I'm a filmmaker, former BBC journalist, cottage dweller, gardener and cat lover. I make documentaries, profile videos of individuals and companies as well as trailers for productions and festivals. Check out my other blog Diva Films: My life as an operatic filmmaker and my website annekostalas.com. Follow @viewfromalake on instagram and twitter."