Falling in love with Maine, USA. 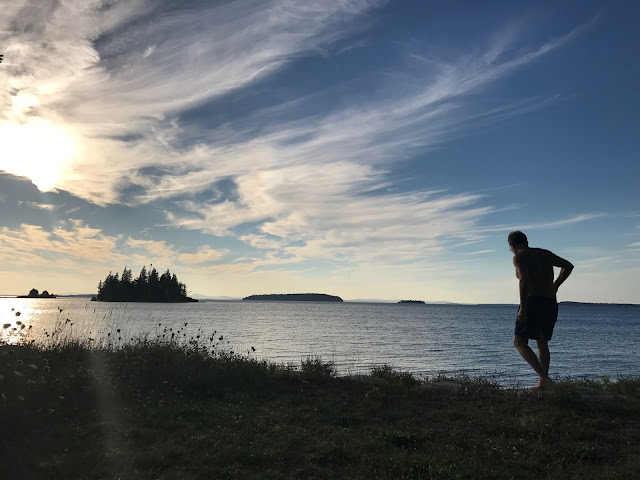 Maine has always attracted me - it's a seaside thing I suppose. It's also a lobster thing. What's not to like? We chose Deer Isle, planning to explore masses of coastline but when we got there we fell in love with the island and didn't move much at all. In our defence it was also a very long drive from Montreal.

Deer Isle has a population of around 2000 and lies west of Bar Harbor and Acadia National Park. We stayed at the Cottage on the shore which is available either as a rental or a home swap. It's not like any cottage I've ever seen with four bedrooms and three bathrooms and it made the perfect location from which to stare out to sea. Many little islands peppered our view and we were never without binoculars checking on the cormorants drying their wings in the sun, the loons with their haunting call and lots of ducks which we never did identify fully. But we didn't just have one view as on a lake but multiple views as the tides came and went and the skies changed with every moment.

Sunset-watching became a daily ritual and we got nervous if we weren't down at the water in time to watch the show, a drink in hand. We even dared to swim in the ocean although we knew it would be cold. The owner later told me on the phone: "No-one swims there without a wetsuit."
"We're crazy Brits," was my reply but even I had to admit the temperature took my breath away and so we made a note to try the swimming hole in the village the next day.


The house could not have been more comfortable and it managed to stay spacious and cozy at the same time. Fully equipped right down to the lobster picks. There was even a sitting room we had not really ventured into and after a beachcombing walk loaded with sea urchin shells and barnacle covered rocks we finally looked in the room. There was a coffee table with a glass top covering dozens of finds just like ours. We felt a little foolish.

When the tide was low we could walk onto the closest little island and enjoy our new vista. We had a few woodland walks and one day spent 30 minutes watching a pair of pileated woodpeckers ripping the hell out of a tree just yards from our deck. At one point a squirrel tried to get in on the action and the birds spread out their wings as a warning and he cleared off. Fascinating. Star-gazing was another favourite activity as there was zero light pollution on this island.

What a thrill to swim in Lily Pond in the village, just a short drive away. It felt positively tropical compared to the ocean and was big enough for a really long wild swim. On our first visit a bald eagle floated across the water and over our heads. The water was like silk and it was a treat to have it almost to ourselves. Some noisy folks crashed into our haven one day just as we were leaving. "Wow, this is WILD," they shrieked and then proceeded to put on wetsuits. Lightweights, we thought.


If you're going to Maine you have to eat lobster. Not just that you have to kill lobster. We discovered the local lobster co-op in Stonington only sold live lobster and so we were faced with committing several murders. Our vegetarian friend joked he would release them back into the ocean while we weren't looking but we managed to drop them in a pot of boiling water and the deed was done. The guilt I felt for committing the act was assuaged somewhat by the incredible taste. They were fabulous. 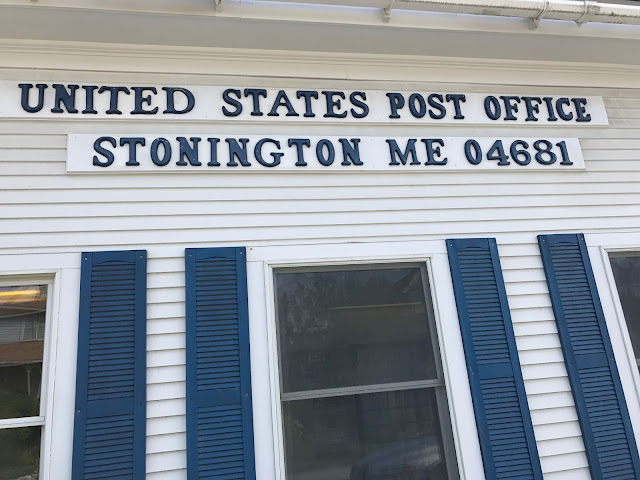 Buying the lobster had been a strange procedure. We walked into the co-op to find a nice lady behind a desk. She looked like she was book-keeping and I looked around in vain for a lobster. "We've never done this before. How does it work?'" I asked, suspecting we had wandered into the wrong building. But she was very helpful, explained the pricing structure and asked us whether we wanted hard or soft shell. "Hard-shell,' we replied in unison as we had done SOME research. (not complete idiots but close). We were told to wander down the jetty where a nice man gave us our lobsters (see video below). On paying our woman told us: " A customer recently said they were in Paris and there was Stonington Lobster on the menu. Can you believe it?"


We did a quick tour of Stonington which had been a 15 minute drive to the bottom of the island. There we found an unexpected opera house, ate a lobster roll and then headed back home. It was getting close to the sunset hour and we were getting nervous. But probably not as nervous as the lobsters in a bag in the back of the car. 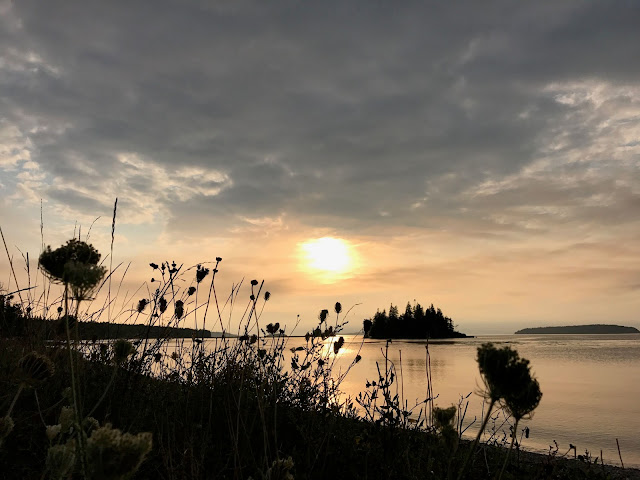 Deer Isle village seemed very sweet but we only ventured in for dinner one night and ate at the Whale's Rib Tavern in the Pilgrim's Inn. I WOULD recommend it (especially the smoked cod chowder) but possibly not if you're a vegetarian and not if you like to be served quickly at the bar.

On our journey home we looked for a good ol' American diner en route and hit upon the rather splendid A1 diner in a railway carriage in Gardiner, Maine. The menu was huge (they even have their own cookbook) and we had fish tacos, hot dogs, grilled swiss cheese sandwich and even tried the biscuit (savoury scone thingy) but were given pause for thought by a huge convoy of Trump-supporting bikers riding past the window. Enough to make you choke on your coffee. But we forgive you Maine. We thought you were  just swell.


For more info try the tourism website : VisitMaine.com
Also I recommend the magazine which serves as a comprehensive guide to the state and has a great newsletter: DownEast.com

Don't miss the chance to read more posts by clicking subscribe at the top of this blog.

Email Post
Labels: A1 diner deer isle downeast gardiner lobster maine stonington usa
Anne Kostalas
"There are two things I love in life - travel and opera. Which is probably why I write a blog on each of those subjects. I'm a filmmaker, former BBC journalist, cottage dweller, gardener and cat lover. I make documentaries, profile videos of individuals and companies as well as trailers for productions and festivals. Check out my other blog Diva Films: My life as an operatic filmmaker and my website annekostalas.com. Follow @viewfromalake on instagram and twitter."