I'm not sure we are typical tourists when we go to New York. We don't like line-ups and we don't really shop so that rules out quite a lot of activities. But we do have a lot of fun spending very little money. We walk almost everywhere and try to discover new things to do. Here are a few things we discovered for the first time.


1. THE ROOSEVELT ISLAND TRAMWAY
No, I'd never heard of Roosevelt Island either, but as I was looking at my instagram feed one day (@viewfromalake) I discovered the tramway and did some investigating. Turns out it is a very cool $4 ride across the East River to the island, with spectacular views of the city. We wanted to see it at night and by a fluke timed it so we could take in the sun set as well. Yes, there was a line-up, but just for a few minutes and it was completely worth the wait. Roosevelt Island used to be called Welfare Island because of all the hospitals there. We walked off the tram and into the queue for the return journey, so we didn't explore, but as you can see from the video below the ride itself is a great attraction. I added some captions to tell you more about the tramway and some great music from tenor David Menzies and Trio Ponté.

2. CENTRAL PARK FROM TOP TO BOTTOM.

Every trip we've ever made to NYC includes lots of walking in Central Park - not just the bottom bit with the horses and carriages but the whole length of the park, around the Jackie Kennedy Onassis reservoir, up to the very top with the Harlem Meer and the beautiful Conservatory Garden, lunching in the cafeteria of the Loeb Boathouse, once getting interviewed by Humans of New York photographer Brandon Stanton on Literary Walk and this time to the zoo, which we'd always seen signs for but always strolled past.


We joined lots of eager families pressed up against the large window watching one of the grizzly bears dig a hole (while worrying about what she was going to put in it) and admired the red pandas as they strutted their stuff.
Here's a short video clip:

A real pleasure to be a kid again and stand slack-jawed at the wonder of nature. We also loved the penguin house, feeding time with the sea lions and on a chilly day - the tropic zone. The only disappointment was the snow leopard enclosure was closed - with no explanation from the zoo despite promoting these animals on all their literature - even the tickets.

Breakfast in New York City is my favourite meal. Your day is full of potential and you can convince yourself you will walk off whatever they put in front of you. We usually check out a new breakfast place with every visit. Last year it was the baked eggs at The Jane Hotel which got our attention. (I've been cooking a version of this recipe every since)  This year we were on the upper west side so we ate at Barney Greengrass AKA the Sturgeon King- an experience where you need to pay attention.

We were just about to give up when we heard the waiter tell the couple in front of us it would be a 20 minute wait. Then I overheard the couple talking about how their table was for six - so we got back in line and hoped for the best. We were seated 5 minutes later. We also overheard a conversion about the  potato latkes and even though we couldn't find them on the menu we ordered them - and found them utterly delicious. It pays to be nosey.

We had read in The New Yorker that every holiday season the New York Transit Museum puts vintage train cars in service and all you have to do is be at the 2nd Avenue subway station at allocated times.

The carriages date back to 1907 and my favourite was car number 8013 with it's beautiful bright green interior circa 1949. The nostalgia train rides the regular subway lines and it was a joy to see travellers stunned as this beauty pulled in to the stations in place of their regular subway train.


Those in the know dress up in period costume for the occasion and ride up and down the line:  it all adds to the sense of fun. You can catch a glimpse of them in this short video clip from car 8013.


Other new discoveries were some cool spots in Greenwich Village including Carry on Tea and Sympathy - part tea room and part British goods store - I stocked up on twiglets and we had banter with the co-owner Sean Kavanagh-Dowsett. Weirdly we also discovered the oldest apothecary in America - Bigelow Drugstore which has a very tempting online store too (old-fashioned hand cream anyone?) We paid a first visit to the excellent Museum of the City of New York with its top notch Chalsty's Cafe run by Amy's Bread. How cool for a museum to use a popular local bakery instead of what can often be bland museum-style food. The oatmeal scone got a tea fascist's thumbs up from me.

So thanks New York City for being so full of surprises like Hamish the dog here and his owner who wished us a happy visit.  For more photographs from our trip visit the Dear England, Love Canada Facebook page. 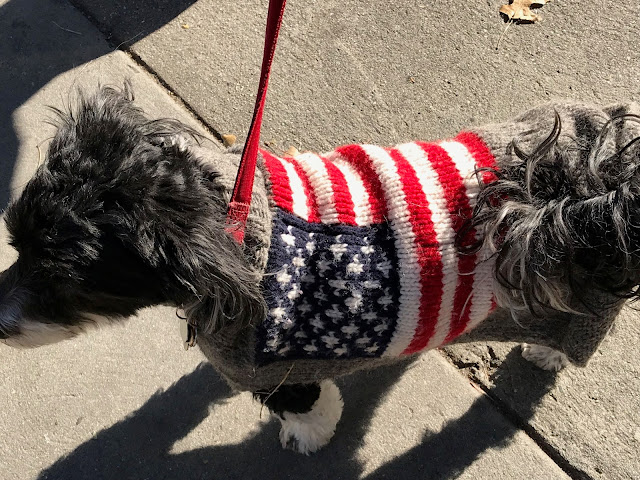 Email Post
Labels: BARNEY GREENGRASS Central Park New York City NOSTAGIA TRAIN. ROOSEVELT ISLAND TRAMWAY
Anne Kostalas
"There are two things I love in life - travel and opera. Which is probably why I write a blog on each of those subjects. I'm a filmmaker, former BBC journalist, cottage dweller, gardener and cat lover. I make documentaries, profile videos of individuals and companies as well as trailers for productions and festivals. Check out my other blog Diva Films: My life as an operatic filmmaker and my website annekostalas.com. Follow @viewfromalake on instagram and twitter."