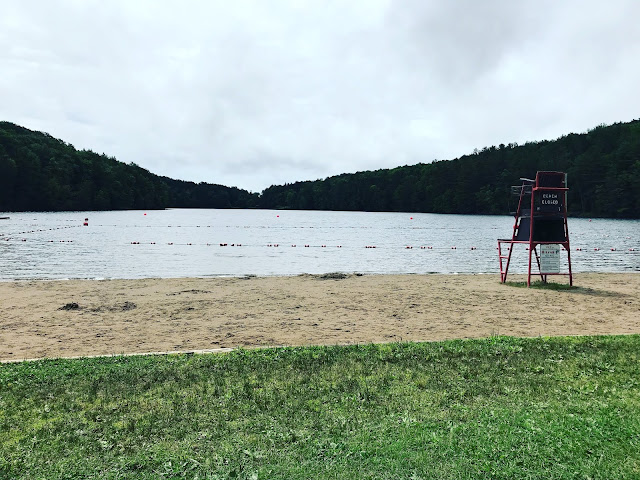 We wanted to try a new swimming hole and a previous guest at our airbnb had recommended Gilbert Lake State Park. We set off without caffeine for the park and were delighted to see that the park office sold coffee. Not only that, the boss had called earlier and instructed staff not to charge as it was a quiet day.  Two gold stars for the park so far. We were directed to the beach where lifeguards worked a roped off area. We decided next time we would just swim at the other end of the lake on our own but for now - we had showers and changing rooms and a cafe so we stayed and swam within the ropes.

We had a matinee performance of the Barber of Seville to see and so didn't mess around. (We're here for the Glimmerglass Festival - a favourite thing to do in the summer).While swimming lengths in the deepest section only one other swimmer joined us. "So you're swimming lengths too," he said, somewhat surprised. "I hope we don't bump into each other." We thought this unlikely as the swimming area was huge. But sure enough just a minute into swimming we realised this guy swam on the diagonal and so no matter where he started he would swerve swim right towards us. We were swimming perfectly straight lines. I'd never thought of it as a particular skill before but apparently not everyone can manage it. We spent the rest of our swim against the ropes trying to avoid him and then ate our pre-opera lunch at the cafe - hot dogs and diet coke.


I used to attend the Glimmerglass Festival in smart attire but high temperatures and lake swimming in between shows limits you somewhat in your dress. Many people show up in shorts and t-shirts - especially the matinee. This reminds me of a man I saw the other day walking in Montreal where we have lots of outdoor pools. He was heading home in wet trunks, flip-flops, bare chest and a towel round his neck. Just like he was strolling from the bathroom to the bedroom but actually crossing a fairly busy street. Gotta love Montrealers. We thought we had plenty of time but didn't account for the 20 minute wait on a quiet country road due to construction. Just us and a female construction worker staring at each other while she waited for the go ahead to let us go. We ended up racing into the show with a minute to spare.

So glad we made it to this one - gorgeous set, really strong cast and lots of genuine laughs with great comic acting and quirky staging. I did notice as Figaro (Joshua Hopkins) entered the opera walking down the aisle to the stage - what a stunning voice he had - but I didn't know that I would be chatting to him later in our swimwear. As often happens at Glimmerglass there was a great question and answer session after the show. This one was led by conductor Joseph Colaneri, who was really entertaining on his own. Singers Hopkins, Emily D'Angelo ( a real standout for me as Rosina) and David Walton (Count Almaviva) were generous to stay after the performance and answer our questions. One audience member asked:"It was hot in here for us but what was it like for you on stage?"  Joshua Hopkins answered that every time he left the stage he had to hydrate.


Another great production and my sixth successful visit to Glimmerglass Festival. We jumped in the car and headed straight to our favourite swimming beach at Fairy Springs to beat the heat. On arrival we were driving into the woodland car park when I shouted :"That's Figaro." Sure enough baritone Joshua Hopkins had the same idea as us and was heading down for a swim. "So you hydrate like this too,' said my husband. We told him how much we'd enjoyed the show and he was very gracious. He told us he is an alumni of the young artist program here at the festival and said it helped his career immensely.  It certainly seems that way as he now has a thriving international career and can be seen soon at San Francisco Opera, Washington National Opera and Pittsburgh Opera.

I've said this many times before but the combination of the outdoors, opera and some great breweries  and restaurants makes this trip a success for us. We tried a new brewery on our last night for dinner and absolutely loved the beers. Looking around this felt like a place that locals came for dinner.
The waitress at the Council Rock Brewery asked about my British accent. For some reason I explained "We're here for the opera not the baseball."
"I'd keep your voice down if I were you," she said with a wink.

For more ideas on things to do in and around Cooperstown : http://www.thisiscooperstown.com
For more on the Glimmerglass Festival: https://glimmerglass.org

Email Post
Labels: cooperstown. glimmerglass. opera
Anne Kostalas
"There are two things I love in life - travel and opera. Which is probably why I write a blog on each of those subjects. I'm a filmmaker, former BBC journalist, cottage dweller, gardener and cat lover. I make documentaries, profile videos of individuals and companies as well as trailers for productions and festivals. Check out my other blog Diva Films: My life as an operatic filmmaker and my website annekostalas.com. Follow @viewfromalake on instagram and twitter."