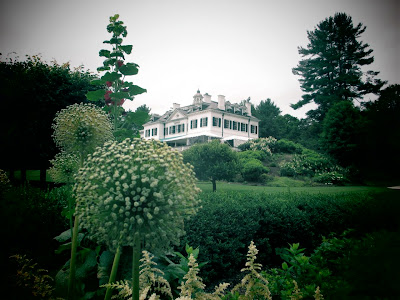 It's quite a contrast between eating breakfast at Joe's Diner, where the waitress shows you the design for her new tattoo, to rolling up at The Mount, the former estate of novelist Edith Wharton. Only in America. After the loud conversations among locals in our new favourite breakfast place we sip yet more coffee on Edith's terrace and gaze at the lake and formal gardens below. "A delicate French chateau mirrored in a Massachusetts pond," as Henry James wrote to a friend.

Wharton (1862-1937) was born in a time when a proper marriage was the only ambition a woman was expected to have. She defied her time and became one of America's greatest writers. Her extensive works include The Age of Innocence, The House of Mirth and Ethan Frome.

The latter two were written here in the elegant surroundings of her mansion, based on a home she had once seen in Lincolnshire, England (Belton House) and remembered down to the last detail. It is obvious she had a keen eye for design. She wrote an influential book on the decoration of houses and you soon find the rooms inside her home are a testament to good taste. Wharton was born a Jones and her family's indulgences were said to have led to the coining of the phrase, "Keeping up with the Jones".

Her personal life is intriguing. A marriage arranged by her parents, a husband with mental health problems and friends who included Theodore Roosevelt, Henry James and Jean Cocteau. In later life she threw herself into war work and was named a chevalier of the Legion of Honour. She ended her days in France and is buried in the American cemetery in Versailles. The estate features in a gorgeous series of photographs by Annie Leibovitz in Vogue magazine on exhibit in the Stables. The whole place leaves you with a sense of peace but also hunger to know more about Wharton. The Mount is one of only five per cent of National Historic Landmarks dedicated to a woman. Am I the only person to find this statistic shocking?

Later we swam at Stockbridge Bowl near Tanglewood. It is a public beach for locals. Not sure if we were breaking any laws. The lake was like bath water and it was fun to swim under the floating markings and out into the centre of the bowl also known as Lake Mahkeenac. In Lenox Shots and The Scoop were two places worth a visit. Shots for the life-changing toasted sandwiches (I recommend the Diego Rivera : chicken, chipotle, avocado) well worth having to deal with the miserable male staff and The Scoop ice cream parlour where we recommend peanut butter cookie dough and key lime pie flavours.

My mum uses an expression about saving your toffee for the big picture and that's just what we did at Tanglewood Music Festival. (saving the best for last) Our last night was a real treat. New technology means that some clever souls have been able to take the original 1961 West Side Story movie with Natalie Wood and remove only the orchestra. So the singing track and dialogue remain. At Tanglewood the Boston Symphony Orchestra played the Leonard Bernstein score live as we watched the film on big screens from the lawn at the Shed. So curious to see conductor David Newman watching the singers from 50 years ago on the screen as if they were here now. Hear him talk about this on the Boston Symphony Orchestra's website. What a great atmosphere - the audience erupted into applause at the end of every big number. We loved it and I think people would kill to see this kind of thing. Very retro.
Our last morning and we saw friend and talented tenor David Menzies  in Britten's Canticles at Ozawa Hall. Perfect end to a perfect festival. Thanks Tanglewood.

For more on things to do and places to visit in the Berkshires.
We stayed at the lovely Hampton Terrace B&B

Have a travel suggestion in Canada? Leave me a message below!
Email Post
Labels: Berkshires edith wharton Lenox Massachusetts Tanglewood the mount
Anne Kostalas
"There are two things I love in life - travel and opera. Which is probably why I write a blog on each of those subjects. I'm a filmmaker, former BBC journalist, cottage dweller, gardener and cat lover. I make documentaries, profile videos of individuals and companies as well as trailers for productions and festivals. Check out my other blog Diva Films: My life as an operatic filmmaker and my website annekostalas.com. Follow @viewfromalake on instagram and twitter."