The day we were Humans of New York. 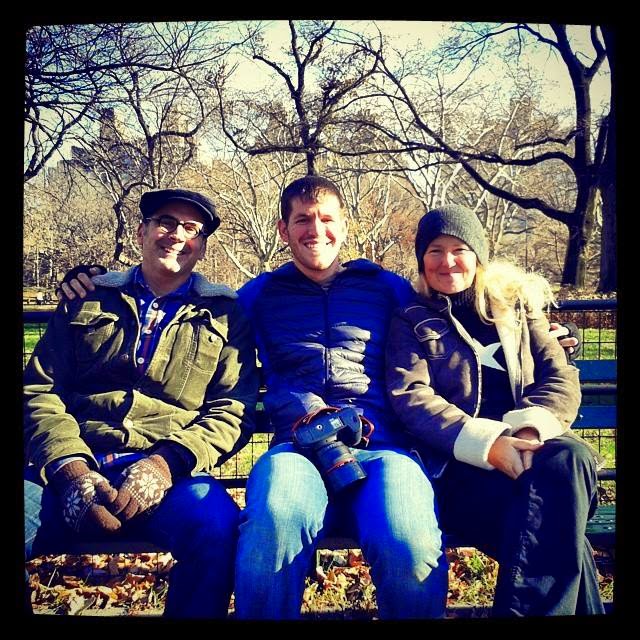 I had just been quite rude to the sixth person who asked us if we wanted to book a horseride within a minute. Finally inside Central Park, away from the tourist touts and the shade of the tower blocks, we bask in the New York December sunshine.  We sit on a park bench on the literary walk - like a couple of tourist cliches. I take a selfie of us on my phone and  I am trying to instagram it when I hear “Excuse me, do you mind if I take your photograph?”  For some reason I do not adopt my default British rudeness when being approached by a stranger in the street . There is something different about this voice - it is polite and gentle. I look up at a guy in a blue anorak with a camera. He has a nice face.
"I have a website called Humans of New York,” he says……….
My first reaction is - this is not possible. The population of NYC is 8 million and Brandon Stanton happens to spot us - a couple of fools on holiday from Canada?  I quickly run through my head the possibility that this is someone pretending to be from Humans of New York and dismiss it immediately. He is saying something about what is required of us. “Yes yes yes.... we’ll do it. Are you kidding me? I LOVE Humans of New York, ” I say. Then I remember that my husband needs to agree too. “Sure,” he says looking shellshocked. I think the importance of this moment is a bit lost on him. Later I ask him, "Do you KNOW how many people like the HONY Facebook page?"
"Twenty thousand?" he asks.
"Try 11 million," I respond. Brandon lost his job as a bond trader and moved to New York to photograph strangers in the street. His original idea was to plot the photographs on a map of the city but it evolved as he started using quotes from his subjects about their lives. As a journalist and lover of storytelling I am completely enamoured with his photo blog HONY.  There is nothing more fascinating than other people's lives. It helps that Brandon, who is 30,  is such a sympathetic person. This shines through in his photographs and quotes which can often be heart-stopping in their intensity. He has become a worldwide phenomenon, had awards lavished on him and has just gone to the top of the New York Times non-fiction bestseller list with his book.

As soon as WE agree to be photographed the voices in my head start nagging away. I’m trying to adjust my t-shirt to make me look thinner when I realise we’re not holding hands. Shit. Now we are going to look like those couples who don’t talk in restaurants. I've often read the comments under the photographs on HONY's Facebook page and people can be quite opinionated. I quickly put my hand on my husband’s knee.  I might be too late. Brandon is very quick.
“That was the easy bit,” he says, crouching at our feet. Then he starts with the questions and holds up his phone to record our answers. Things start to go rapidly downhill.
My husband is uncomfortable  (I’m not good at the performing seal thing, he tells me later). I am completely starstruck and every time Brandon asks us a question - I feel the weight of the responsibility. I can see our woefully lame answers emblazoned on the HONY website with a picture of me tugging at my t-shirt.
“What was the happiest day you ever spent together?” asks Brandon.
“Well, Friday wasn’t bad,” says my husband.
It goes from bad to worse. “I’m a journalist,” I offer as an excuse. “I’m better at asking questions than answering them,” and also "I’m English. I’m not good at talking about myself.”
But Brandon continues, determined to get some sense out of us.  "What is the thing about him that most surprises you?” Complete silence.
After several failed attempts at an interesting answer I ask him if he publishes every interview he conducts. He says no.
“Well there’s no way you’re going to use this but that’s OK. It’s been really lovely to meet you,” I say.
We all laugh way too much out of embarrassment and then Brandon enters into some territory I am much more comfortable with. Complaining.
“What is the hardest thing you’ve had to face together as a couple?”
“Emigrating” we both pipe up. I explain we were married and lived together in my hometown in England for 13 years. My husband is Canadian and six years ago we left our jobs and friends to live in his hometown of Montreal.
“What do you miss most about England?, he asks. I try and think of something quirky and witty but I come up with the stark truth that nags at me every day. “Our friends,”  I confess "and the beaches." Peter agrees…."Yes, our friends .........and the Guardian,” he adds.
“I thought it would be this great adventure,” I say.

“How did you imagine it was going to be?” asks Brandon.
“I thought our life would be exactly like England only with warmer summers, colder winters and fewer drunks….but making friends has been very hard.”
"Why do you think that is?,” asks Brandon.
I prattle on about how we worked for big organisations in England and so met lots of people. My husband, warming up now as an interviewee, cuts to the chase.
“It’s an age thing. We’re grumpy now.”
“Yes. We’re both really grumpy,” I say. "People our age ARE grumpy. We don’t really like anyone.”
As Brandon leaves, with me insisting we were too crap to be featured, he assures me that I have no idea how much fun he has had.
Later I tell my husband - this is perfect, we have a picture of him with us (which I insisted on getting) and yet we won't have the hassle of being on the website.
"You don't actually mean that do you. You're not telling me that you won't be disappointed if we don't get published?" he asks.
"You know me too well," I reply.

Email Post
Labels: Brandon Stanton Central Park HONY Humans of New York New York New York City
Anne Kostalas
"There are two things I love in life - travel and opera. Which is probably why I write a blog on each of those subjects. I'm a filmmaker, former BBC journalist, cottage dweller, gardener and cat lover. I make documentaries, profile videos of individuals and companies as well as trailers for productions and festivals. Check out my other blog Diva Films: My life as an operatic filmmaker and my website annekostalas.com. Follow @viewfromalake on instagram and twitter."