A decade in the woods. 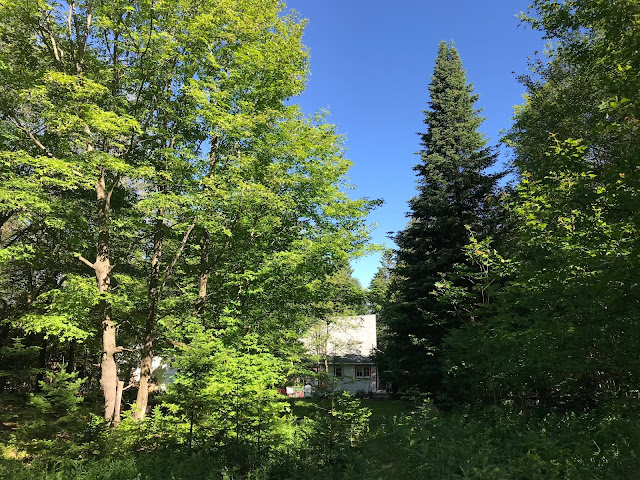 Unbelievably it is ten years since we started spending our summers in the woods. I've been writing about it here for most of that time. The cottage we inhabit, has been in my husband's family for generations and is one of the few original properties left here on the lake from the early 20th century. Most have been torn down and replaced with larger, more modern homes. This cottage is summer-only and come late Fall we are craving the luxury of proper insulation and fewer vermin so a move back to the city can be less heartbreaking than you would think.

In those ten years since I emigrated and my Canadian husband returned home from England, we have  had many summer adventures.  Probably the most dramatic was when we awoke from a nap to find black afternoon skies. As I rushed out to grab the washing from the line  he shouted to get back inside. The wind was rising and the air turned strangely white. He could see trees in the forest toppling like dominoes on the other side of the house. That was 2013 and we later found out a mini-tornado had ripped through the woods around the lake. We got off lightly. Our neighbour lost 150 trees that day. We did have to chainsaw several blocking our road however.

The wildlife has played a central role in our summers here - sometimes too much of a role like the Spring we returned and opened the trap door in the bathroom to look down on a raccoon family, or when the porcupine shot out from under the porch when we returned after winter. Then there was the hot summer night when I awoke to see a bat circling our bed or the strange case of the heavy breathing animal in the darkness which turned out to be a raccoon stealing our bird feeder. Now we have a trailcam so we catch a lot of critters on film in the woods both day and night. We also bring the bird feeders in at night. We suspect someone is living in our brush pile and so I've just set up the camera nearby to see who emerges at night.


Some summers have been spectacular, like the long hot summer of 2012. Others rainy like last year when, as a result, our gardens never looked so good. We used to see a lot of hares grazing in the mornings but now we are more likely to see a fox. Already this summer we've seen the porcupine, a raccoon, the mink on the beach, a ruffed grouse and chicks and deer. Some summers bring an unexpected glut of one particular bird - goldfinches one year, woodpeckers the next.

Similarly last year was great for foxgloves. They seemed to grow everywhere. Wildflowers come back every year and our favourites are the trilliums, especially the painted trilliums, and the pink Lady's-slipper orchids.


My love of gardening has grown with every summer here and I've learned a lot from my mistakes.  There are huge challenges - not least the rocky land, fierce winters, short summers and bugs. The rhubarb patch we dug with our in-laws on one of our first visits here - is still going strong-  but a terrible place to visit because of the mosquitoes. (Worth it for a crumble though.) Safer territory are the raised beds we've built around the house, one for herbs and one for vegetables - rocket, cucumbers and beans this year - all from seed.

I've tried to keep cottage-like plants around the foundations with perennials such as foxgloves, hollyhocks, monardas (bee-balm), hydrangeas (the blue Endless Summer, the cone-flowered Pinky Winky and a Little Lime,) poppies, lavender and cone flowers (echinacea). I've even got a wisteria I bury in a grave every winter.
Some plants have been here longer than us such as hostas, martagon and day lilies, iris, cornflowers, shasta daisies and lupins. Newer ones have been acquired to overcome the challenge of shade such as astilbies and heucherella (my current favourite plant). This year I've moved into shrubs (I think it's an age-thing) with red and gold berberis or barberry as they call it here; Siberian cypress which spreads sideways rather than upwards and a beautiful emerald and gold euonymus. I dream of a cutting garden for summer bouquets and I'm trying out Ammi majus though they are quite slow growing from seed. I'm hoping my friends' Livingstone daisy seeds will enjoy a hot Laurentian summer.
Beyond doubt swimming the lake is one of the great pleasures of the summer. Our swimming season has expanded with each summer and we are more daring with colder temperatures in the shoulder seasons these days. A 15 minute swim to a boathouse on the point is my regular route although when too cold we like to swim laps to the raft and back. We've been inspired by writers who love wild swimming (more of this in my next post).


Some things here are just magical such as the fireflies, the loon call in the middle of the night and the different coloured sunsets. I've never seen one to match this above taken in June 2010 although the one below, on the night of my brother-in-law's wedding party here at the lake, was a close second. Much champagne had been drunk but the lake really did turn gold.