A road trip to the other New York.

It was time. Time for our annual trip to New York. Not the city but deep into that great big bit above it. From Montreal it was an easy drive through the Adirondack Park - quiet roads, ditches full of Queen Anne's Lace and cheese and salami sandwiches balanced on our knees. Our destination is Cooperstown for the Glimmerglass Festival - one of the best opera festivals around with one musical, two operas and a concert to see. (it runs until August 25 2018).
First stop - the border where one guard told us: "I think I need to broaden my horizons and go see an opera." We agreed and entered the US.

We hope to return soon to the Adirondack Park, created in 1892, but for now we drove right on through and got to Cooperstown in five and a half hours. Lake swimming has become just as important to us as the music so we headed to a little beach that had been recommended to us last year - Fairy Springs - before our first show. The first thing we saw on the path down to the beach was a young Amish man pulling horse and buggy with canoe on top. We later learned he had wanted to go fishing on his day off but lives 25 miles away in Edmeston. It took him three hours to get to Lake Otsego (named Glimmerglass by James Fenimore Cooper in his novels) on his horse and buggy as the Amish do not use motorised vehicles. We're not sure how much fishing he got done or what he did with his horse while canoeing but for a six hour round trip we hope he had a good time.

The beach was beautiful, quieter than others we'd visited on the lake, with only a few people perched on chairs on the tiny pebble beach. The wake from passing boats sent waves crashing at your toes.  You enter the roped off swimming section via a long wharf with lifeguard at the end. A much deeper swim than sandier more open beaches here. The water was cool, refreshing and the most wonderful shade of green. We were surrounded by tree-covered hills with views of Cooperstown at the bottom of the lake. The park is guarded by caretaker Jack, a young guy who gets to live in the lovely old cottage here and assures us this is the quietest beach around. The steep steps and lack of sand deter families so it's virtually all adults. We swam here every day of our trip and got to see some familiar faces - especially three women who came every day, offered us fresh blueberries and delighted in a swim late in the evening.

With wet hair and a quick change we were off for dinner at The Blue Mingo Grill - an eight minute drive around the lake and perfectly located on the water's edge - before our first show at the Alice Busch Opera Theater - a celebration of the centenary of Leonard Bernstein's birth - the fabulous West Side Story directed by Francesca Lambello. A show that left you all tingly - it was so much fun. Young artist Joseph Leppek (Tony) and Vanessa Becerra (Maria) were strong performers and standouts for us were Amanda Castro (Anita) and PJ Palmer (Action).

Two of our favourite scenes were the hilarious Gee Officer Krupke and America ( the audience agreed - applause was very long for this one). The show used original choreography reproduced by Julio Monge and the dancing was without doubt the biggest star of the show.

We booked a room in an airbnb house in Hartwick (a 30 minute drive from the theatre) and can recommend the house (which has three rooms available) and the village for its complete lack of noise at night as well as helpful host Jason - who grew up in the property. 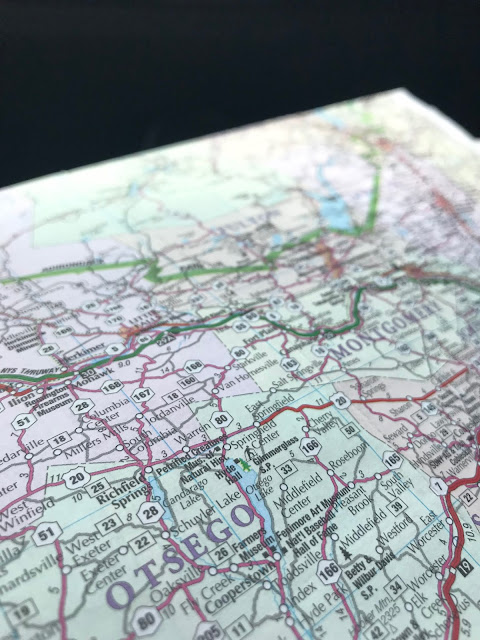 Glimmerglass Festival runs until August 25. Read more about it here.


Email Post
Labels: cooperstown fairy springs glimmerglass opera
Anne Kostalas
"There are two things I love in life - travel and opera. Which is probably why I write a blog on each of those subjects. I'm a filmmaker, former BBC journalist, cottage dweller, gardener and cat lover. I make documentaries, profile videos of individuals and companies as well as trailers for productions and festivals. Check out my other blog Diva Films: My life as an operatic filmmaker and my website annekostalas.com. Follow @viewfromalake on instagram and twitter."