Are you the farmer?

The worst thing about winter for me is having to leave our woodland cottage and no longer being able to garden. We have a balcony in the city but are never there long enough in the summer to keep plants alive, so I arrive plantless into Montreal for the long winter. I miss being able to get my hands dirty and care for my plant babies. This summer I've raised cucumbers, haricot beans, arugula and basil from seed and maintained a healthy herb garden and expanding rhubarb patch at the cottage. This as well as attempting to keep a flower garden in the challenging soil of the Laurentians. (shade-loving plants that don't mind shit soil anyone?). Summers in the cottage garden have given me a yearning to learn more.

So it was I discovered the City Farm School at Concordia University runs an apprenticeship program for people like me who want to learn more about growing fruit and vegetables. I had to do an interview at the farm and was thrilled when my application was accepted.  I work for 60 hours over three months doing a weekly session working on the NDG Farm at the Loyola campus of the university, harvesting and selling produce at the Farmers' Market on Tuesdays and researching and giving a presentation on a horticultural topic. But that isn't the half of it. Turns out the school is incredibly inspiring. Other apprentices are like-minded folks with a fascination for growing stuff and making things out of it.


Hardly a minute goes by without someone mentioning something they are making at home. One apprentice was rushing home to have a go at making wine after the equipment arrived in the post that morning. Another told me she makes ground cherry jelly as we sorted through the fruits to sell at the Farmers' Market. Others are growing corn to try and mill flour to make tortillas while there are condiments galore being produced at the farm to sell at the market. I can highly recommend Jacob's hot sauce and can't wait for several different types of sauerkraut. I brought these tomatoes (above) home from my first harvest at the school. I felt duty bound to make something out of them and not just eat them in a limp lettuce salad so I found this recipe from one of my favourite cooks, Nigel Slater, which I adapted to make seven jars of tomato chutney. I stuck in some peaches which needed using up.


I'm calling it my Friday Afternoon Tomato Chutney as that is the shift at the farm which produced those beauties. As someone who has only grown about five vegetables ever I am just loving exploring all the produce which is growing at the farm. I really want to see what can be grown in Montreal and hopefully have a go myself next summer in the Laurentians. One day as the spoils were being divided I was given something called a watermelon radish together with a pepper, some radish seeds, onion and garlic. What a beautiful vegetable and incredibly tasty - I'm definitely adding it to my seed list for next year. Also I plan to grow purple bush beans (eat them raw as they turn green when cooked)- which we had to harvest just 30 minutes before we sold them at the Tuesday Farmers' Market at the Loyola Campus (4-6pm come on down!) 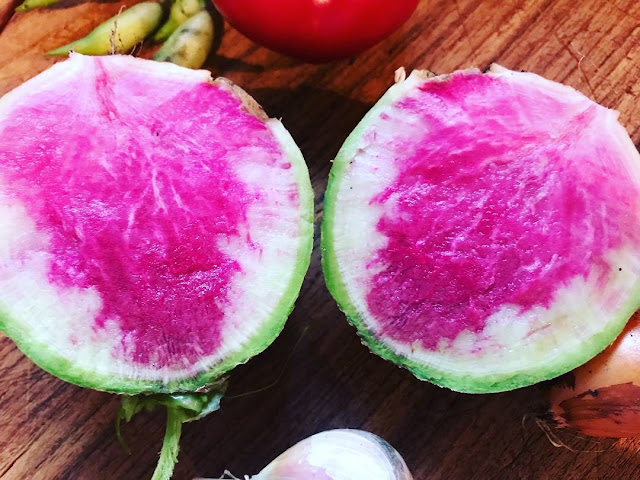 The apprenticeship is incredibly professionally run and Jackie Martin, one of two co-ordinators, imparts wisdom as we work on the farm. One task we were given was to remove mildewed leaves from squash. The whole time our team was working she was answering our questions patiently on a million horticultural subjects. We've also learned how to dry and clean garlic ready for market and as we sat with our toothbrushes scrubbing the little blighters clean, Jackie gave us a lesson on seed formation on flowers and how to harvest them. As well as working on our own vegetable patches the wider farm school has a fruit orchard, grapevine, medicinal herb garden and lots of space devoted to every fruit and vegetable you could imagine from African eggplant (it's bright orange) to black raspberries.


There's a series of Saturday workshops too and our first one was on urban beekeeping with Miel Montreal. This was a fascinating hands-on look at the practice with an honest assessment of the effect of so many urban beekeepers these days. No-one was forced to get too close unless you wanted to. I found myself holding trays of bees and honey - something I never imagined I would do. Braver folks were manning the smoke blowers around the bees and lifting the trays in and out. A great way to spend a sunny Saturday and a chance to explore the community gardens at Le Virage at the Université de Montréals' new campus.


As well as getting your hands dirty I love working at the Farmers' Market on Tuesday afternoons. Some customers are surprised that it was all grown just a stone's throw away at the City Farm School - especially more exotic produce such as ground cherries. Some vegetables I don't even recognise and need a crash course in identifying hot peppers including jalepeno, serrano, shishito, bangles and cayenne. Other customers are keen to tell you what they grow and ask your advice about pests. I made a few sales of tomatillos after talking about the salsa verde I made recently. This is one of the bonuses of growing so many different fruits and vegetables - it forces you to look up recipes and be more adventurous in your cooking. Now excuse me while I make some ground cherry jelly.


The City Farm School apprenticeship costs $275 for the 60 hour course from September until November 10. There are three sessions in spring, summer and fall and you can do them all or individually. Bursaries are available.