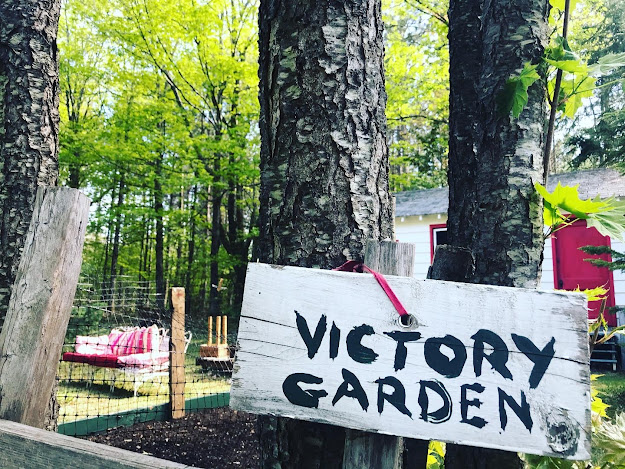 Gardening has saved me during this pandemic. From filling our flat with vegetable seedlings back in March to tending my plants in our raised beds in July - it has given me a purpose. But more than that - it has filled me with joy when nothing else was available. I was suddenly without work, unable to visit my mum in England and unable to see friends - so the peas, broad beans and cucumbers have become my new best pals.

Planning my summer garden in February: my stash of seeds.

Just ordering the seeds  in January made my heart flutter but I hadn't realised how important this little stash of joy would become. My seedling babies were housed in our kitchen, my husband's office and sometimes the dining room. I bought some grow light bulbs and hoped for the best. When the sun shone the seedlings went out on the balcony where we enjoyed a cup of tea and they enjoyed the warmth. The first thing I did every day was go and check on them, turn on their grow lights and marvel at their growth. Yes I became a seedling nerd and instagram was full of their images (@viewfromalake). 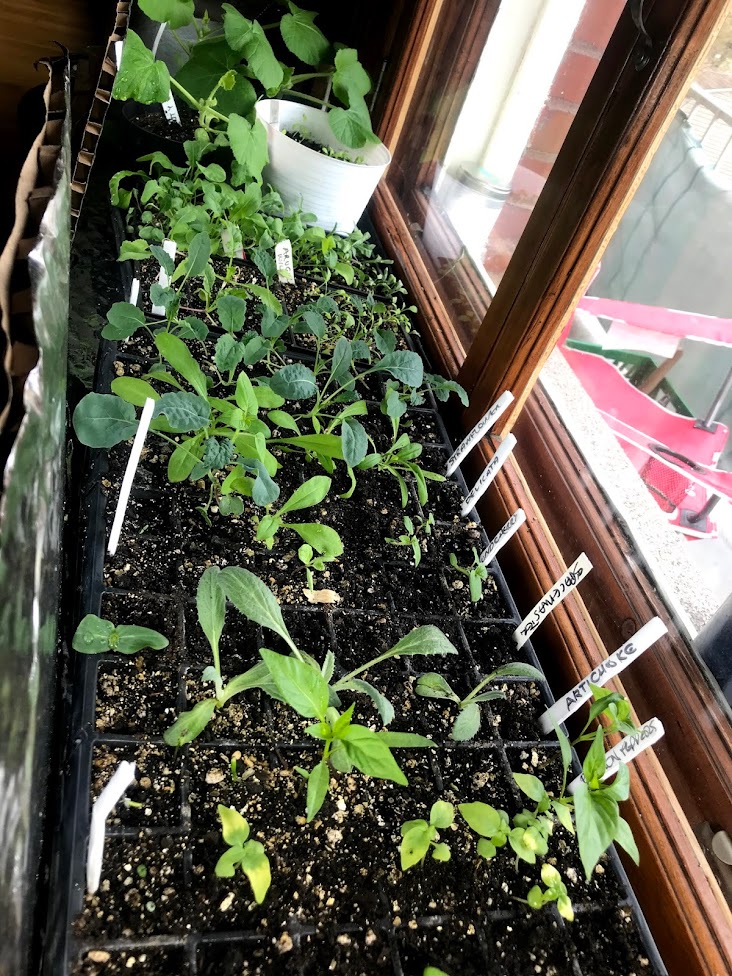 There is no greater joy than watch your seedlings grow. I love that this pandemic has meant many people are trying it for the first time. You are growing your own food, creating life from a seed and nurturing living things. What's not to like?  Nevertheless there was a lot of eye-rolling from the husband when I marvelled at the miracle of life - every five minutes. 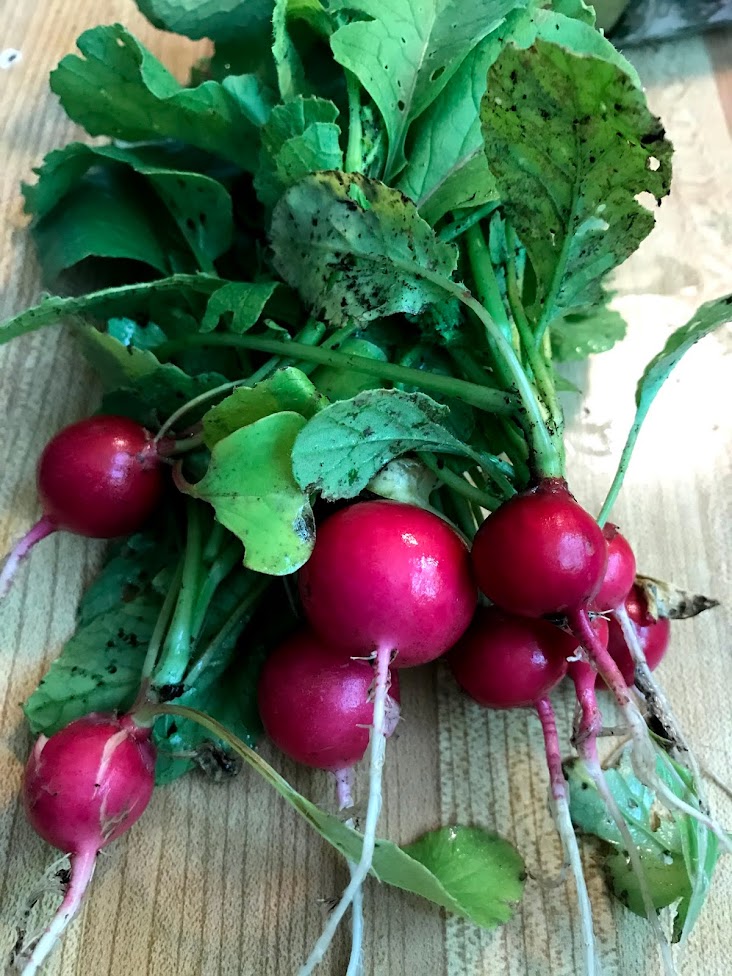 My first crop - raxe radish which were very hot and very pretty.
We are lucky enough to have left the city and now are riding out the pandemic in the woods. My radishes have been harvested, the cucumbers  and broad beans are all looking good in our raised beds and the tomatoes, squash and peppers are thriving in the greenhouse- but growing a vegetable garden has not been without its disasters.
I planted up my beautiful kale seedlings in May and went into the city for 24 hours (big mistake).
When we returned to the cottage I did a double take as I looked at my biggest raised bed. There was nothing in it. Surely this is where kale existed just yesterday? Enter the groundhog - who seems to have set up home in the elephant rocks (some giant rocks that look like the largest of pachyderms). He had eaten the lot. You can imagine how frustrating that was.  Green stumps resided where kale had previously been.
Not only this but there was a heatwave that day and temperatures reached 33C.  Some of my other seedlings got fried in my little plastic greenhouse. The door was of course zipped up - because I didn't want any animals in there. You just can't win. Despite this we are living in the habitat of many wild animals and it's better to protect your vegetables than harm the creatures so we've fenced off most of the beds.
Then the beautiful cucumbers I planted fizzled out - whether from damping off or mildew and now I'm growing new ones to take their place. (Have a lovely new cucumber on them today) Also a rather charming cucumber hanging basket. 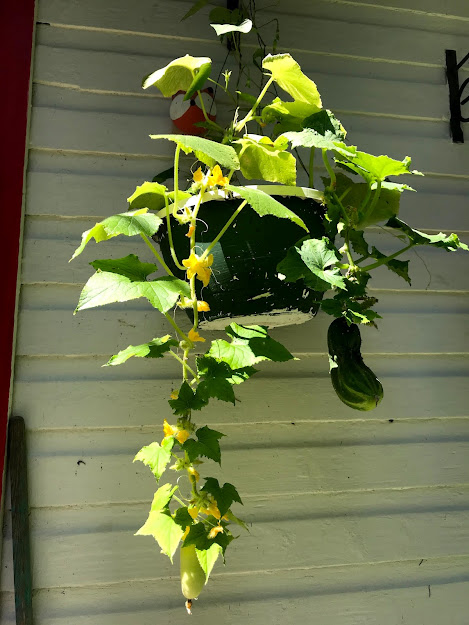 You can see the spacemaster cucumber on the right and dragon egg on bottom left.

I'm particularly excited by the cutting garden which I've never grown before. The idea is you grow flowers which last particularly well in a vase and either give friends bouquets in the summer (at a two metre distance) or cut them for yourself. I'm inspired by British gardening guru Sarah Raven who knows a thing or two about growing flowers for cutting. I recommend her website and YouTube channel.
One downside of the lockdown is I usually buy some annuals at the garden centre at this time of year - cosmos purity and red verbena - but now I have to be patient and wait for flowers to show. So far I've just got flowers on my beans, peas and squashes and nothing for a bouquet.
I'm keen to grow more fruit so we've been given some blueberry bushes by my jam-making mother-in-law and one day I'd like to get some fruit trees. We acquired lots of apples from the in-laws last summer and I made apple jelly for the first time as well as apple gin liqueur which we gave away at Christmas. 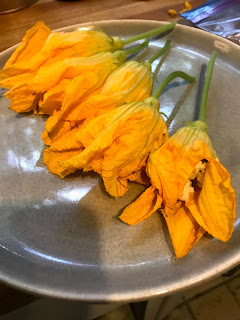 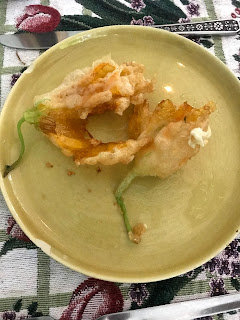 Fried squash flowers filled with basil and feta and cooked in a beer batter.
I love cooking and creating with what I'm growing. We've been frying up squash and courgette (zucchini) flowers up a plenty, stuffed with feta and basil. Delicious and impressive when you serve them up to friends. Just remember to get up early to harvest the flowers when they're open.
Pesto for pasta is also a popular hit - with various herbs and kale; also kale smoothies and this week a rhubarb upside down cobbler.
Ice lollies (popsicles) are a summer favourite and our current recipe is haskap berries with yoghurt and honey. Also rhubarb gin liqueur which is ready in a few weeks. 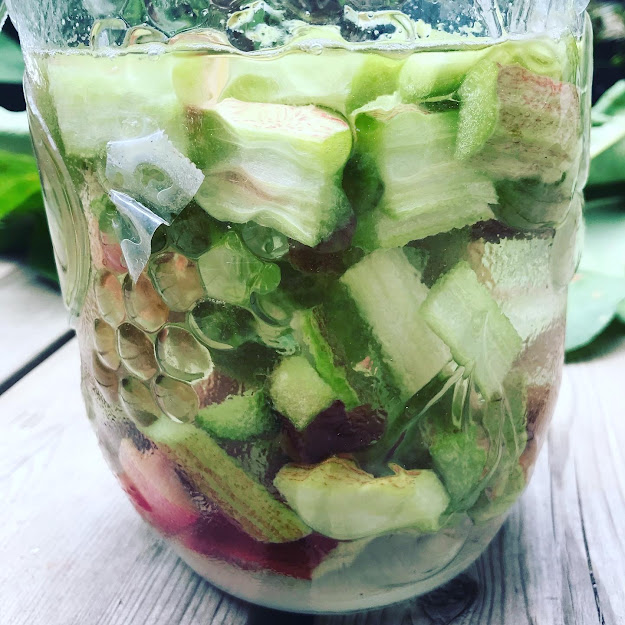 I've been doing a bit of foraging too - dandelions, which I dried in the sun, for tea but my violet syrup didn't go particularly purple (it was brown) and so was abandoned. Meanwhile I had a cup of lemon balm tea today in my new teapot.
Pollinating veggies in the greenhouse is something I didn't realise I might have to do. Chances are fewer pollinators will make it inside this distinguished plastic edifice and so I must pollinate my squash and cucumbers. So now I'm obsessed with looking for female flowers which I think must be pollinated in 24 hours of opening. I run out with my little paint brush and daub pollen from male to female. My family think I'm mad but we'll see who's laughing when my arms are full of cucumbers.

On a more distasteful note I read that human urine (it has to be male) is offputting to animals who may have been tempted by your vegetable seedlings. So yesterday when the husband shouted "the groundhog's on the lawn", I ran outside with two receptacles of urine and liberally splashed it about near the aforementioned elephant rocks. I didn't have time to put shoes on and my socks did feel a bit damp afterwards but sacrifices have to be made to keep the groundhog off your veggies.

Email Post
Labels: garden gardening grow your own pandemic vegetable garden
Anne Kostalas
"There are two things I love in life - travel and opera. Which is probably why I write a blog on each of those subjects. I'm a filmmaker, former BBC journalist, cottage dweller, gardener and cat lover. I make documentaries, profile videos of individuals and companies as well as trailers for productions and festivals. Check out my other blog Diva Films: My life as an operatic filmmaker and my website annekostalas.com. Follow @viewfromalake on instagram and twitter."