A walk around my garden.

Who doesn't love snooping around other peoples' gardens? So I thought I'd give you an early tour. June here in the Laurentian hills north of Montreal is still early compared to the British gardens of friends. Let's face it there was still a bit of snow on the ground when we moved back to the woods in mid April. But once that switch has been flicked and Quebec's non-existent spring has turned to summer - things start to really get moving. So regard these as the Before... pictures. My father-in-law called my vegetable garden my victory garden long before it became a thing with covid. Infact during the war there was a real victory garden on this spot. It has its challenges here in the woods - not least the tree roots which criss-cross the earth and also the shade which the trees produce. Nevertheless I find raised beds and greenhouses help solve some of the problems.  I grow my flowers mostly around the house but they are still to bloom so I'll just concentrate on the back garden here.
Here is the kids' area which Norman has taken a liking to - since they planted up their newly refurbished beds this weekend. They chose and sowed their own seeds so they have a curious mix of cucumbers, mexican sunflowers, edamame and broad beans. Plus I donated nicotiana and dwarf sunflower seedlings. As you may know I had to leave my precious babies while in England for three weeks. (I'm talking about the seedlings). The gardening team did good work but some plants keeled over and others grew a bit straggly- looking. Hoping some rain and hot sun will sort them out.

My veggie beds are only half full so far but I'm proud that two of them contain things I've never grown before. Brussels sprouts and cabbage - all grown from seed and planted out last month. I regularly visit them and gaze at their beauty. Yes I've got it bad. I buy my seeds from organic sellers in the area. When I was at Montreal's City Farm School I was told you should buy seeds from growers who are local if possible. That way they have been developed for your conditions.

As you can see in the background I have two plastic greenhouses which are way cheaper than the real thing but are pretty useful. You have to keep an eye on them though if it's really hot - I had a lot of seedlings fried one year when we went into town and I forgot to unzip them. On a really hot day I lift up their skirts and let the breeze in. Inside them this year I will grow tomatoes (marmande, brad's atomic, manitoba, dancing with smurfs blue cherry) and hot peppers (padron, shishito and chinese five colour). But also I am attempting to get my squashes to grow big and strong before I add them to another new feature in the garden this year - the squash arch! Here it is below looking somewhat bare. on Amazon where I bought it - it is called a wedding arch and is festooned with dried flowers with a bride and groom beneath. In my garden it will hopefully be dripping with big ugly squashes such as blue hubbard, red kuri, waltham butternut and acorn. No-one really knows however as many of my squash were potted up unlabelled by the gardening team so it's anybody's guess who is who. They will be planted on either side of the arch in the beds. When it works well the leaves cling to the arch and the heavy squash hang down like lanterns. I'm having a competition with my mate Pauline in England as she also has an arch. We are calling it our Squash-off!! 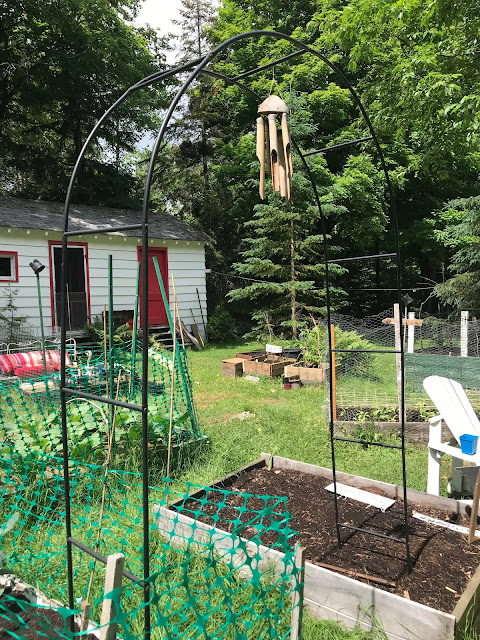 Earlier this Spring the local municipality was giving away free trees so I went along and picked three from a choice of five. You've never seen such an unpromising looking bag - no bigger than a crisp packet with three sticks in it. Nevertheless I planted them immediately and now look at them below. They were unlabelled and my tree knowledge is not great but even I can tell which is the oak, which is the red maple and therefore the third has to be the black cherry.

Seedling potatoes of red and purple are planted up between the rhubarb in the woods - I reckon animals don't eat potato greens - let's see if I'm wrong. This is the original site of our vegetable garden which was later designated the rhubarb patch as too many mosquitoes lurk there in the trees. Before I emigrated I did not know that mosquitoes prefer the woods. Infact the only ones I'd encountered were on holidays to the Greek islands. Over the years I've grown accustomed to them and have stopped counting bites and just get on with it. (covering up is also sensible). 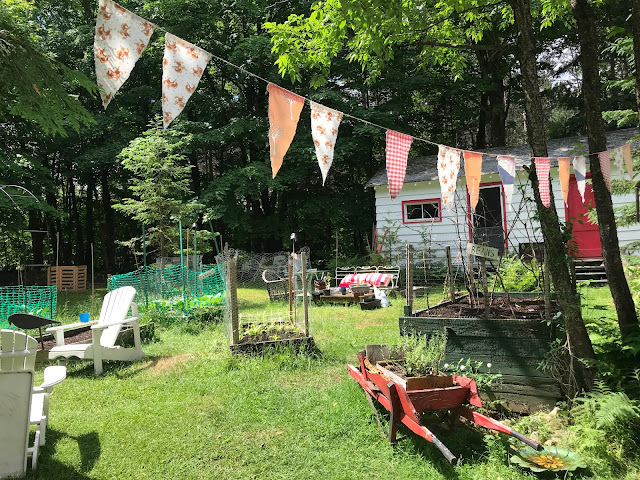 As I write we are having the most tremendous rain storm and I can hear the garden singing with delight. It has been a very dry summer so far. A local spring has dried up for the first time ever. So next time I update this blog you will no doubt be looking at burgeoning vegetables. Since returning from England I've sown herb and flower seeds and yet more squash seeds incase of disaster. It's always good to have extra seedlings on hand - and if you don't need them - you can give them away. 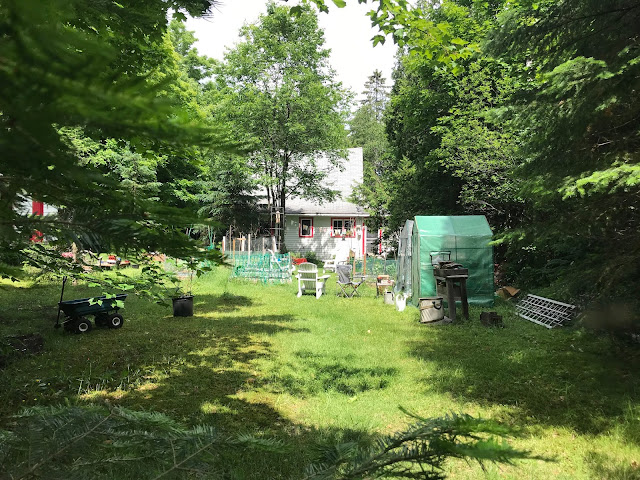 In a few weeks I hope to be seeing flowers on the veggies and plenty of bees and butterflies doing the pollinating (if not the paintbrush will be coming out again). My climbing vine (cobaea scandens) isn't pollinated by insects or humans however - but by bats - which I know we have here so I'm expecting some good blooms.
Finally incase you think my garden is solidly green here is my Morden Blush rose which is cold hardy and somehow survived our winter. 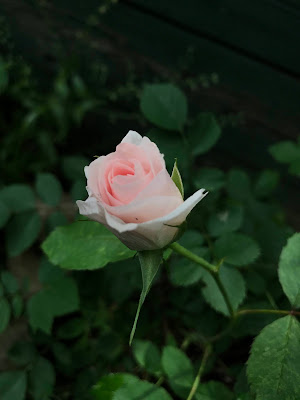