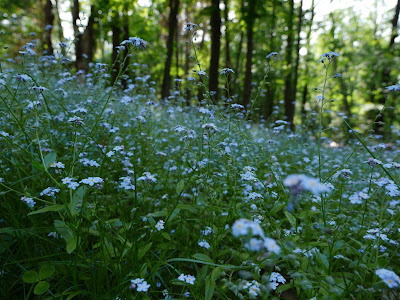 I'm trying to create an English country garden on our little bit of the Laurentians in Quebec. But the truth is as I plant lupins, foxgloves, wisteria and blue hydrangeas the wild flowers that grow around our woods are just as beautiful. Like our lawn full of forget-me-nots which catch the evening light, the weird looking wild lily-of-the-valley which resembles a game of noughts and crosses and the secretive pink lady's slipper orchid.

One of the earliest flowers we see when we move to the country in the Spring is the trillium. Usually I see the purple version but this year we were treated to the painted variety below. Strict instructions are issued to the lawn mowers in our family to avoid cutting or walking on these beauties. In fact Spring lawns go unmowed as increasingly lovely wildflowers pop up and show off.

Among them the wild strawberry below, the vibrant blue bugleweed reputed to stem bleeding and on our old road, pink and purple columbines are standing proud yet hardly a soul will ever see them. Many of them ARE appreciated by the bees and butterflies however. Tiger swallowtails and white admirals are in abundance but we see none of the threatened monarchs which used to fly these woods (despite all the milkweed which they need to survive and which David Suzuki has a campaign to encourage us to plant.)


We've been here a month and as summer takes hold the colours start to change. The cool blues of early Spring give way to the hot-looking indian paintbrush which fills the lawn by the lake and is much loved by the tiger swallowtail.


Keeping a flower garden here in the woods is fraught with difficulties. For many of the wild animals it is a handy buffet and so gardeners can be heard cursing the rabbits, groundhogs and deer when they notice the loss of their lettuces or phlox. Garden sprinklers are employed by some as a gentle way of keeping deer from their plants.

We have foxes in our woods and on finding a headless dead bird the other morning I am hoping the same creature might keep the rabbit population down too. As I write this a deer has just wandered across our lawn nibbling at the trees.  Strangely we haven't seen a single rabbit this Spring but we have seen and heard the fox calling in the night - a rather haunting sound. Gardeners like foxes.


Not so popular is the groundhog, who when he isn't eating flower heads is sunning himself with cheeky abandon on a rock. While picking my rhubarb the other night, for a crumble, we disturbed a porcupine who promptly climbed a tree in full view and put his head down in the hope that we could no longer see his great spiky body clinging to the trunk. Eventually he knew the jig was up and scuttled off.


The truth is being British I find these creatures incredibly cute. Even the family of raccoons who were living in our crawl space when we first moved in and prevented us from having water.  It wasn't that they drank it all but in order to turn on our water we have to go into the crawl space and flick some ...er...switches (you can tell I never do it). So we managed without water for a week, collected it in buckets from the lake, and lowered a radio into the space inhabited by the raccoons. They don't like the sound of the human voice and they definitely don't like the CBC because after a night of that  - they had moved out and we were able to make endless pots of tea as is our wont. To be fair to the raccoons the CBC can be really annoying sometimes.

Read about the stunning Reford Gardens in the Gaspé.
Email Post
Labels: cabin canada chalet cottage Quebec wildflowers
Anne Kostalas
"There are two things I love in life - travel and opera. Which is probably why I write a blog on each of those subjects. I'm a filmmaker, former BBC journalist, cottage dweller, gardener and cat lover. I make documentaries, profile videos of individuals and companies as well as trailers for productions and festivals. Check out my other blog Diva Films: My life as an operatic filmmaker and my website annekostalas.com. Follow @viewfromalake on instagram and twitter."