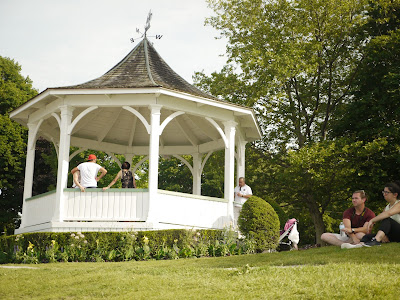 Another beautiful day, another play and more places to explore at the Shaw Festival in Niagara-on-the-Lake. If you've ever seen the movie The Dead Zone by David Cronenberg starring Christopher Walken you will know this gazebo. The film is a Stephen King thriller and one of my favourites. Walken plays a road accident victim who develops the power of second sight after waking from a five year coma. It's creepy and it's brilliant and it's also filmed in Niagara-on-the-Lake (in the wintertime). When I first visited the gazebo this week, donated to the town after the movie was made, there was a minister in it. It was as if he was exorcising the spot of this supernatural movie. He wishes me a good morning and confirms this is the gazebo from the film.

The gazebo is in Queen's Royal Park in NOTL which is a wonderful getaway from the heat and the crowds in midsummer. You can sit in the shade looking out on Lake Ontario, paddle, sunbathe, take your picture in the gazebo or set off in a kayak or on a paddleboard. Although it's a two minute walk from the centre of town it feels like it is a million miles away and a great place to catch your breath.


As regular readers of this blog will know I am a bit of an afternoon tea fascist. I like things to be right and so I was thrilled to spend an afternoon at the Prince of Wales Hotel and find nothing wanting. I would go as far as to say it is the best afternoon tea I've had in Canada. Not just great sandwiches, scones, clotted cream and pastries but also a wonderful atmosphere in the drawing room with antique silver tiered tea tray (below). We decided to skip dinner before our next play at the Shaw Festival and indulge in the full works for tea instead. We could even time it right with a five o' clock start. So much about this tea was right - we didn't have to ask for the butter and milk, a good choice of teas (I had the chai), lots of good fresh sandwiches were included and a to-die-for lemon meringue tart. There were proper fruit scones and we could have a glass of sparkling wine too. Check out the menu here.

We took a doggie bag away with the cakes we couldn't eat and I would recommend this as an essential NOTL experience while at the Shaw. Tea is served between 12 and 6 and they let you linger if you start late. I was surprised to see that the Prince of Wales Hotel has a portrait of Edward VIII (who was to later cause a constitutional crisis in Britain with his abdication to marry Mrs Simpson). His Nazi sympathies have also been in the news recently with him coaching the young future Queen Elizabeth to perform a Nazi salute. The hotel was named before all this happened of course. According to the hotel the royal name is in honour of Edward's parents, the Duke and Duchess of York (later King George and Queen Mary) after they visited Niagara-on-the-Lake in 1901. 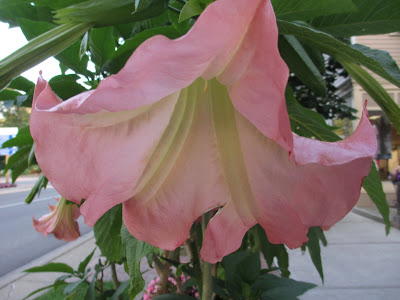 A short walk to the splendid Shaw Festival Theatre and a bold production of Pygmalion awaited us - a real Shaw play at the Shaw Festival. It was Henry Higgins and Eliza Doolittle like you have never seen them before - including the f-word, skype, ipads and clips from Kanye West, BBC News and the Great British Bake-Off. Typical Shaw inventiveness and we loved Patrick McManus as Higgins and Donna Belleville as his mother.

Niagara-on-the-Lake in just over a minute is a video I've just edited which gives a flavour of the town and the Shaw Festival below including a lot of the places I've just mentioned. https://www.youtube.com/watch?v=CCAUxpaPzcU

Here is a clip from The Dead Zone with Christopher Walken in THE gazebo in NOTL.


Previous blog posts about The Shaw Festival. Stay tuned for more from the Shaw.
Email Post
Labels: Niagara-on-the-Lake Prince of Wales Hotel Shaw Festival The Dead Zone
Anne Kostalas
"There are two things I love in life - travel and opera. Which is probably why I write a blog on each of those subjects. I'm a filmmaker, former BBC journalist, cottage dweller, gardener and cat lover. I make documentaries, profile videos of individuals and companies as well as trailers for productions and festivals. Check out my other blog Diva Films: My life as an operatic filmmaker and my website annekostalas.com. Follow @viewfromalake on instagram and twitter."