Back at the Shaw: sunsets, cemeteries and top shows. 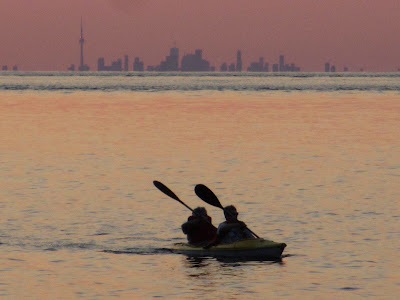 Three years visiting the Shaw Festival and it never disappoints. Not just the quality of the shows but the scale of wondrous things to do here in Niagara-on-the-Lake. I just added sunset-watching, cemetery tours and biking/gawping at the posh neighbourhoods to my list of recommendations. We arrived in the evening and our first night was spent watching a show that makes a regular appearance here yet we've never seen before on our two previous visits - a stunning sunset over Lake Ontario. We were lucky to get a good view of the Toronto skyline over the water too. Ironically we have often missed this treat because we are usually in a theatre at this hour.

Karl from Doncaster in England, who kits us out with bikes from Grape Escape Wine Tours, listens carefully to our needs. "We want to stay on quiet roads and explore a bit". He recommends a little tour of a neighbourhood called Chautauqua which is found behind Ryerson Park on the shores of Lake Ontario west of the main town. "When I first moved here I had to pull my car off the road just to look at these beautiful houses", he says.

Chautauqua (sha-TAR-kwa) was every bit as beautiful as he said. Cycling is a dream on these quiet streets and the whole area has an upscale beach house feel. I got the sense we were not the first to come gawp at the gorgeous homes. One house was named Fish Bowl.


Niagara-on-the-Lake is often hot in July so I'm always interested in quiet places to cool off away from the crowds of shorts-clad tourists. St Mark's Cemetery, the oldest in Ontario is just the place. Shady and picturesque we discover it is also the location for theatrical cemetery tours which delve into the town's rich history. Although they don't start until September we chatted to writer Barbara Worthy and Marie-Alice Hanson from the Niagara Historical Society Museum who have helped create the tours.

Actors dress as characters from the town's history and the tour is led by a gravedigger (an airline pilot in real life) from grave to grave. Among those buried here who have been brought to life is Sgt Ernest Saunders who ran the tuck shop at Niagara Camp during World War One, Gladys the suffragette who presents a white feather to an unlucky man on the tour, Maria Rye who ran a controversial home for street children in the town and Elizabeth Ascher, who is feted by the Polish for making soldiers of Polish descent feel welcome during WW1 with concerts and other events in their own language. During the war of 1812 this church was used as a hospital by American soldiers. "Many lives were lost here and men were buried where they fell. You can still feel an energy here," says Barbara. Tours book up early so if you're coming in September contact the museum to get a place.

At the end of a glorious sunny day we dine at the Peller Estates Winery looking over the vines in the evening light. I could not imagine a finer location. Excellent food (wild salmon with wasabi caviar) with a glass of ice cuvée rosé and then off to our first show. As usual Sweet Charity was a Shaw musical of the highest production values. Stunning set with a New York subway theme with top flight choreography, acting and singing. My faves were Jeremy Carver-James as Daddy Brubeck but Kyle Blair as Oscar Lindquist and Julie Martell as Charity Hope Valentine were completely convincing and hilarious. Every member of the cast seemed to be in the moment for every second. And so were we.

Read more from the Shaw.


Email Post
Labels: grape escape Niagara-on-the-Lake Peller Estates Winery Shaw Festival Sweet Charity
Anne Kostalas
"There are two things I love in life - travel and opera. Which is probably why I write a blog on each of those subjects. I'm a filmmaker, former BBC journalist, cottage dweller, gardener and cat lover. I make documentaries, profile videos of individuals and companies as well as trailers for productions and festivals. Check out my other blog Diva Films: My life as an operatic filmmaker and my website annekostalas.com. Follow @viewfromalake on instagram and twitter."