What did you think of the show? My recommendations at the Shaw. 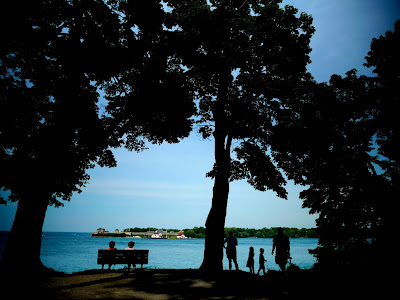 "I just got back from the Shaw".
"Which shore?" asks the Canadian. That is because I am not saying Shah as they pronounce it here (to my British ears). Once we have established I was at the festival named after George Bernard Shaw  the next question is "Which shows would you recommend?" This year (our third visit) we saw six shows out of a possible ten at Niagara-on-the-Lake. By far our favourite was the musical Sweet Charity which was just a blur of great tunes, sublime dancing and some cracking acting. You may have seen the movie with Shirley MacLaine. I love that the Shaw does a musical -  a great contrast to some of the more serious plays.

Although I was expecting Henrik Ibsen's Lady from the Sea to be a weighty watch this was actually my favourite of the five plays we saw. Completely engaging with great performances by Moya O'Connell as Ellida Wangel and Ric Reid as Dr Wangel. This new version of the Ibsen classic was created by award-winning playwright Erin Shields. The minimal set worked well and I was transported to the clifftop above the sea where the drama takes place. A must-see.

On a much lighter note Peter and the Starcatcher was laugh out loud funny - and reminded me at times of a pantomime with the evil villain Black Stache played by Martin Happer. It was written by Rick Elice and serves as a prequel to the Peter Pan story. The production won five Tony awards on Broadway, is fast-paced with lots of genuine laughs for adults and children. There are lots of "oh yeah" moments when we suddenly start to see the beginnings of the Peter Pan story we know so well and the Captain Hook scene is nothing short of hilarious.

The receptionist at our hotel told us most guests had said The Twelve Pound-Look was their favourite. We weren't disappointed even though this one-act play by J M Barrie is only 35 minutes long. We loved Moya O'Connell again as Kate and Patrick Galligan as the pompous Sir Harry Sims. The last line of the play delivered by Kate Besworth as Lady Sims is a classic. I'm a huge fan of these period comedies which reflect the lot of women at the time.

Caryl Churchill's Top Girls, set in Thatcher's Britain, also explores feminist themes. The sacrifices women make to become successful. The first part of the play involves various women from history who talk of their losses around a dinner table while the second half is set in the 1980s and features employment agency boss played brilliantly by Fiona Byrne. I especially liked the way the all-female cast prepared for the various scenes - with costumes, wigs and makeup, on stage rather than off. 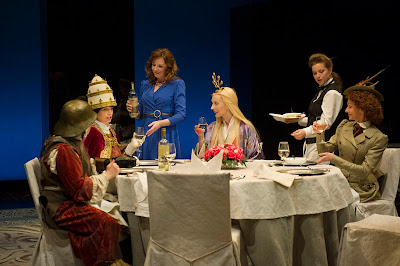 I've already mentioned Pygmalion in a previous post suffice to say it is not how you read it in school. Shaw is known to be bold when it comes to modernising the classics. You have been warned. But this is a festival for everyone - with a huge variety of productions to choose from. I'm actually not a regular theatre-goer. You are much more likely to find me at an opera than a play but the Shaw is a chance to dive in and really soak up the amazing talent that is on offer here every summer. Not just that but the plays are performed in one of the prettiest villages in Canada - Niagara-on-the-Lake and if you've read my previous posts you'll know there are endless possibilities outside the theatres as well as on the stage. That's why we've been back so often.


Next stop - The Glimmerglass Festival in central New York State.
Read previous posts on the the 2015 Shaw
Email Post
Labels: canada festivals Niagara-on-the-Lake Ontario Shaw Festival
Anne Kostalas
"There are two things I love in life - travel and opera. Which is probably why I write a blog on each of those subjects. I'm a filmmaker, former BBC journalist, cottage dweller, gardener and cat lover. I make documentaries, profile videos of individuals and companies as well as trailers for productions and festivals. Check out my other blog Diva Films: My life as an operatic filmmaker and my website annekostalas.com. Follow @viewfromalake on instagram and twitter."