Bohemia in an all-American town.

You cannot get more all-American than Cooperstown. Home of the National Baseball Hall of Fame and centre of a spurious claim that the game was invented by army officer Abner Doubleday in 1839. More than 14 million people have visited the hall of fame and its museum over the years. You might think it a strange mix that opera-goers like us also flock here for the Glimmerglass Festival. But it is a mix that seems to work and who is to say that there is not some crossover? We visited the baseball museum on a previous trip and loved it. But we cannot help but wonder if the two institutions could comingle a little more and help gain a fresh audience for opera?

Discounted tickets for Hall of Fame visitors at the festival's one musical for instance would seem like a good first start  - after all many of these shows which have played on Broadway are as American as the Yankees (Previously Carousel, Camelot and Annie Get Your Gun and next year Oklahoma and Porgy and Bess).  How about a baseball batting range on the lawn infront of the Alice Busch Opera Theater for show-goers with artistic and general director Francesca Zambello and singers taking the first swing?


I won't charge for this bit of marketing genius but as an opera fan (and Brit) I do enjoy a bit of all-American fun in Cooperstown. Hoards of fans wearing baseball shirts tramp the streets buying baseball memorabilia. Little boys swap baseball cards and grown men try to impress with their swing at batting ranges.  We even bought some stars and stripes paper plates to take back to Canada for an election party.

We enjoy the breakfast places in town too. Stagecoach coffee has a great little garden out back and seems to have a certain hipster appeal (we saw beards). We also saw young artists from the Glimmerglass Festival getting their caffeine fix.  Good to see that Danny's Market and Doubleday Cafe are still going strong too - which we have visited in the past and recommend.

If you only see one opera in your life you should probably see La Bohème by Puccini (warning: take Kleenex.) The Fenimore Art Museum in Cooperstown features an exhibit at the moment on Toulouse Lautrec in Bohemian Paris and includes costumes from Metropolitan Opera productions of the opera - also featured in this year's Glimmerglass Festival. We never miss this art gallery and its nice tie-ins with the operas we have come to see.  We also had breakfast here in the museum cafe which has a wonderful outdoor terrace looking out onto Glimmerglass itself - Lake Otsego. 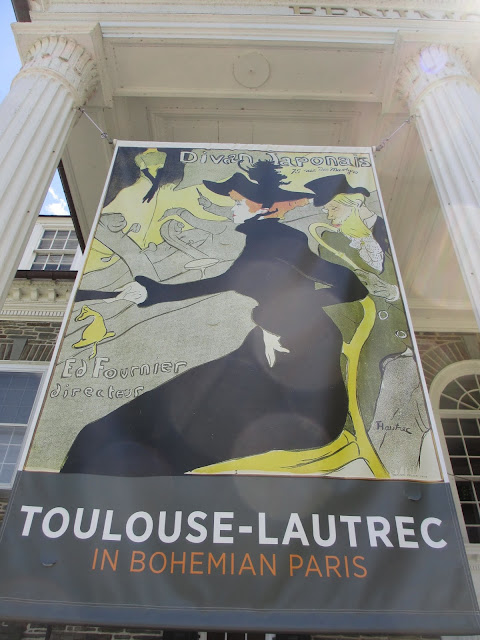 I must have had something in my eye when we saw the production at the Glimmerglass Festival. Round about the scene when Rodolfo asks his friends why they are all looking at him. Beautiful performances from Michael Brandenburg, who we thought a stand-out in Macbeth last year and Raquel Gonzàlez as Mimi, who moved us deeply. People were talking about baritone Enoch Hunter as Marcello, an alumni of the young artists program here, as we left the theatre and we agree. He was the full package - great singer AND a great actor. We laughed at loud at his bust-up with the wonderful Vanessa Becerra as Musetta - genuinely hilarious.

Don't ever be late back to your seat at intermission at Glimmerglass by the way or you may be chased by a giant magpie.  Talented actor/dancer/choregrapher Meg Gillentine came out of the theatre to ring the bell and hurry us back during Rossini's The Thieving Magpie. Although a non-singing role she was a massive hit and the bird-theme in the opera was charmingly done - especially the costumes by Myung Hee Cho and bird-like choreography. We especially loved bass-baritone Musa Ngqungwana as the vulture-like mayor - for his beautiful voice AND his feathers.  Tenor Michele Angelini as romantic hero Giannetto was a joy to hear - as was mezzo Allegra De Vita as Pippo  -who we remember loving in Cato in Utica last year. A gorgeous production in every way.


When you're not getting rounded up by magpies there is much to admire as you take the air between performances at the Alice Busch Opera Theater. There is the view of the pond and fountain, other opera-goers and their (sometimes quirky) outfits and then there is Glimmerglass Festival director Francesca Zambello. I think a lot of opera bosses could learn from her. When she says in the programme that she looks forward to welcoming you personally to the festival she actually means it.  She doesn't waste a moment in getting to know her audience. She approaches people with great lines like; "Can I help you -  I run the company," she hands out her business card to all and sundry and she can regularly be seen scrambling over seats to speak to people and get their thoughts. When she hosted a Q and A with performers from The Crucible I said to my friend afterwards: " That would have been just as amazing if it was just Francesca."  Needless to say we find Francesca-watching equally as entertaining as the shows and we stand in smiling awe as she works her magic on audience members around us.

When she asked tenor Jay Hunter Morris to put on his own show at the festival he asked her what he should sing. "Whatever you want. You decide. You're a grown man," was her response. We know this because Jay told us during the show. It was one of many charming anecdotes he threw in between music as eclectic as Wagner, Sting and Tchaikovsky. For us and our weekend of binging on opera his show entitled At This Moment was a perfect finale.  We first got to know him during long afternoons watching The Met in HD's Ring Cycle at the cinema. Famously he was asked to fill in when another singer dropped out and ended up on cinema screens around the world in his incredible portrayal of Siegfried. Susan Froemke's wonderful documentary Wagner's Dream tells the story.  The juxtaposition of a scene from Die Walkure and Sinatra's hit Fly Me To The Moon made me smile at the start of the show and I just kept smiling. A gorgeous rendition of Lenski's Aria from Eugene Onegin by Tchaikovsky was followed by the story of how Jay's sister told him after hearing it, " You really need to work on your annunciation. I could not understand a word you sang." When I told her it was in Russian,  Jay said, she replied: "YOU don't speak Russian."

There were more golden moments - two songs from Sting's The Last Ship musical (did I even hear a Geordie accent?), Vesti la Guibba from Pagliacchi (Jay: "Did I look as if my head was going to pop off ?") and a moving a capella finale with the male members of the young artists program. I could listen to this funny, talented singer all night but sadly our Glimmerglass days were over for this summer and we headed back to Canada - where we also have opera. See you next year glimmerers.

Email Post
Labels: cooperstown. glimmerglass. opera francesca zambello jay hunter morris
Anne Kostalas
"There are two things I love in life - travel and opera. Which is probably why I write a blog on each of those subjects. I'm a filmmaker, former BBC journalist, cottage dweller, gardener and cat lover. I make documentaries, profile videos of individuals and companies as well as trailers for productions and festivals. Check out my other blog Diva Films: My life as an operatic filmmaker and my website annekostalas.com. Follow @viewfromalake on instagram and twitter."