We admit it. We are cat people. But we are also turtle people as it turns out. Here we are in upstate New York to see some great operas and a musical at Glimmerglass Festival and everywhere we turn we are met by cute critters. This is what happens when you decide to build your opera house on the shores of a lake. I have long held onto a fantasy that some music lovers perhaps turn up by boat and emerge into the woods wearing floaty fabrics and ascend to the theatre to watch the show. So we set ourselves a challenge of finding the lakeshore behind the Alice Busch Opera Theater here in Cooperstown. Not as easy as it might sound. Pleasant young men in the car park who guide opera goers on four wheels, tell us - that way lies poison ivy, fallen trees and a dodgy boardwalk. But we are on a mission and assure them we will be careful and head down the trail into the forest.

Two minutes later we walk out of the woods and onto a rickety boardwalk. It's gorgeous down here - like a secret garden of water lilies, old moss covered benches, bullrushes and dragonflies. We spot an egret on a floating wharf,  a muskrat dives into the lake on spotting us, Cooper's hawks call above our heads and kingfishers divebomb the water to catch fish.  This is a scene almost operatic in its beauty. Clearly no-one comes down here - it is completely overgrown and we feel as if we have made  another discovery to add to our list of favourite places to visit here in Cooperstown. We take a picnic along the boardwalk which snakes out into the lake. There are slats missing but we manage to perch on a bench at the end and enjoy our own private watery garden. Then we spot him. The biggest turtle we have ever seen.

I'm a little nervous as he is swimming under the water towards us. I know that turtles can live a long time and something tells me that this one is no spring chicken. We estimate he is two and a half feet in length. We feel he needs an operatic name living here so near an opera house and so christen him Jay Turtle Morris for fun - after our favourite Wagnerian tenor who is appearing at the festival, Jay Hunter Morris. Presumably in his early years JTM might have seen more people on the now disused boardwalk - maybe even music lovers arriving by boat as I fondly imagined. Perhaps he was remembering them as he came to have a look at us eating our picnic. We were happy to see him in this secret wonderland below the theatre. 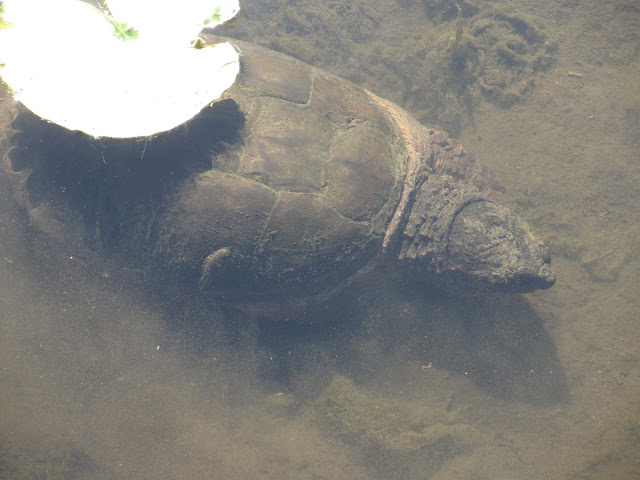 Later we are in the middle of watching the fabulous opera The Crucible by Robert Ward when I notice a bat is flying above our heads. I quickly descend further into my seat and nudge my companion in her side. But this opera is so good even a flying mammal cannot distract me for long. I don't understand why it is not performed more often. It was written in 1961 and serves as a warning for those who seek to rule by fear (ringing any bells, America?) with the tale of the Salem witch trials.
Mezzo-soprano Jamie Barton and baritone Brian Mulligan owned the stage with their portrayals of Elizabeth and John Proctor- in a sort of witchy love triangle. If ever you had any doubt that tenor Jay Hunter Morris loves playing the baddie you can cast it aside here. He revels in the role of Judge Danforth, with a superlative sneer and all-round bad attitude.

The three singers gave a riveting full-throttle performance and then were gracious enough to take part in a question and answer session with the audience afterwards. Bravi tutti.

Over the four summers we have visited the Glimmerglass Festival we have developed a list of must-dos, things we simply cannot miss. Having dinner at the Rose and Kettle restaurant in Cherry Valley is on that list (which now includes looking for turtles). The village itself is quiet to the point of seeming dead but once the door swings open at this restaurant and you see every table full at 5.30pm you realise something major is going on here. The food is always spectacular, the service always slow and we always leave very happy. Crabcakes followed by lemon sage risotto with roast artichokes was my choice and we were only disappointed we didn't have time for dessert as we had another opera to see.

George the cat is on guard at the mansion of Hyde Hall. As a guard-cat he is a pushover and rolls over demanding belly rubs and purrs as soon as he spots a new visitor. The 50-room mansion built in the early 1800s is a delight and a welcome cool shady spot in the mid-day sun. It was the American seat of the Clarke family until 1963 when it was acquired by Glimmerglass State Park - which owns the the beach we visited for a swim. You can see swimmers frolicking in the water from one of the rooms - an incongruous sight from the window of this formal mansion - as if we were staring at a scene from the wrong century. Our favourite room was the blue bedroom up top with a stunning balcony view of Lake Otsego below. We took a tour and would highly recommend it.
As we left Hyde Hall we had a feeling we were being watched and we spot four deer munching grass in the fields. Just more Glimmerglass wildlife which seems to be all around us. Not just on stage.


We stayed at Bayside Inn and Marina.
Read posts about the Glimmerglass Festival from previous years here.

Email Post
Labels: cooperstown glimmerglass opera the crucible
Anne Kostalas
"There are two things I love in life - travel and opera. Which is probably why I write a blog on each of those subjects. I'm a filmmaker, former BBC journalist, cottage dweller, gardener and cat lover. I make documentaries, profile videos of individuals and companies as well as trailers for productions and festivals. Check out my other blog Diva Films: My life as an operatic filmmaker and my website annekostalas.com. Follow @viewfromalake on instagram and twitter."