Opera on the beach: Glimmerglass Festival 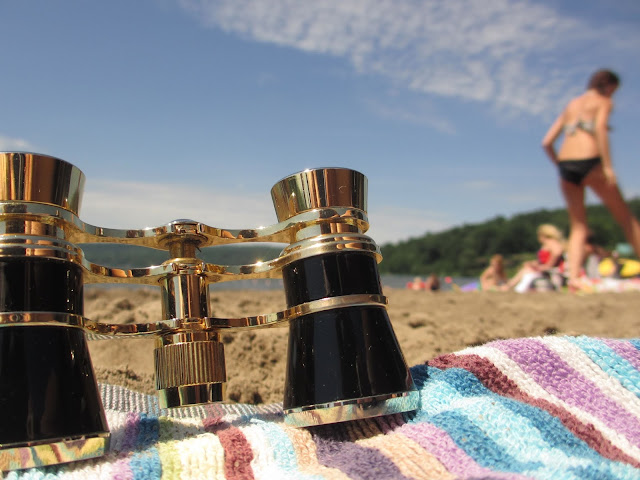 There is so much to do in Cooperstown in upstate New York that we always end up racing around to try and get to the shows on time. A musical, two concerts by big name stars and three operas were on our to-do list this year but also swimming, wildlife spotting, touring a historic home, fine dining, an art gallery and some great people-watching. Yes we're back at Glimmerglass Festival - our fourth visit   - and we're already pleasantly exhausted. The drive from Montreal down the scenic I-87 through the Adirondacks is a treat in itself. The rocky outcrops at the side of the road remind me of Yosemite as we make our way south accompanying some opera singers on my iPod.

We check into Bayside Inn and Marina with great views of Lake Otsego (AKA Glimmerglass in the James Fenimore Cooper books) and head off to our first of six shows: Stephen Sondheim's musical Sweeney Todd. The Alice Busch Opera Theater is nestled in the countryside above the lake and has sliding walls at the sides which open between shows to let in the breeze (and the bats as it transpires - more later). The Bayside is a four-minute drive from the opera house which greatly enhances our chances of getting there on time. The Glimmerglass crowd are fun to observe. For some reason the men's fashions seem the most interesting. Many look as if they were heading to the Metropolitan Opera but decided to go sailing at the last minute. So lots of bow ties with shorts and pink linens with straw hats. It's a delight to watch during the intermission.

Sweeney Todd is a bloody introduction to the festival. "Is that the one with the pies?" asks my mum as I tell her about the show. I loved the staging - the lurex suit and giant scissors of Adolgo Pirelli (not to mention the great voice of tenor and young artist Christopher Bozeka) and the costumes by Terese Wadden but our stand out performer was definitely baritone Harry Greenleaf (also a young artist) as Anthony Hope who made some very sweet sounds as the love-smitten sailor. I especially enjoyed the last moments of this show. There's a high body count, like many operas, but one by one the corpses all come back to life for one last chorus. We left feeling entertained but I won't be eating a meat pie for a while.

What could be a nicer contrast to a hot night in the theatre than a cool swim in a lake? Glimmerglass State Park beach is popular with families including Amish communities who we watched with fascination. Our dash to the opera was on more than one occasion held up by an Amish buggy, a charming sight on country roads here.  Lifeguards are in place to protect opera-goers and Amish from getting into trouble and after our swim we read our Glimmerglass programme on the sand to get ready for the next show - the fabulous mezzo Stephanie Blythe.

One of our favourite eating places in Cooperstown is the Blue Mingo Grill which sits right on the edge of Lake Otsego - a convenient location for the ducks who come to nibble at your toes and hope for dropped scraps. I had the fish tacos and local Nirvana beer from the Ommegang Brewery and watched the arrivals and departures by boat right by our table. The waiting staff wear t-shirts with ten answers on their backs - the most common questions asked by diners. We worked out that no 1 was what is that tower over there and no 2. how long is the lake. You get the idea. The store attached to the restaurant has some great gifts and cool t-shirts but we had an internationally famous mezzo to see and resisted.
One of the great things about concerts at Glimmerglass, in which visiting artists are invited to put on their own show, is that you get to see the real singer and not just an opera character. Over the years we've seen Deborah Voigt, Noah Stewart, Eric Owens and Lawrence Brownlee perform here. We definitely got the REAL Stephanie Blythe and were blown away by her voice.  I've seen my fair share of opera stars at the cinema and on YouTube but there is no alternative to being at a live performance like this.

She opened the concert with a song cycle written for her by composer and pianist on stage Alan Louis Smith. The Vignettes: Ellis Island uses actual quotations from immigrants arriving in the US ranging from heartbreaking to genuinely funny. I was not prepared for the emotional rollercoaster and had to swallow a very large lump in my throat for most of it.  It was absolutely beautiful.

By contrast Ms Blythe announced WE were to sing in the second part of the concert from American songs in our programme. " Now it's your turn to sweat your bosooms off," she told us, on what was admittedly a very hot day. She gave us insights into the history of all of the songs which she sang and we ruined by trying to croak out the chorus. As we staggered back out into the sunshine we felt we'd had a master class with the great Stephanie Blythe, mezzo-soprano and funny lady.


Coming up: What happens when you arrive late to your seat at intermission, who is Jay Turtle Morris and why we love watching festival director Francesca Zambello so much. Plus what we thought of The Crucible, The Thieving Magpie, La Bohème and Jay Hunter Morris.


Email Post
Labels: cooperstown glimmerglass Glimmerglass Festival musicals New York opera Sweeney Todd
Anne Kostalas
"There are two things I love in life - travel and opera. Which is probably why I write a blog on each of those subjects. I'm a filmmaker, former BBC journalist, cottage dweller, gardener and cat lover. I make documentaries, profile videos of individuals and companies as well as trailers for productions and festivals. Check out my other blog Diva Films: My life as an operatic filmmaker and my website annekostalas.com. Follow @viewfromalake on instagram and twitter."