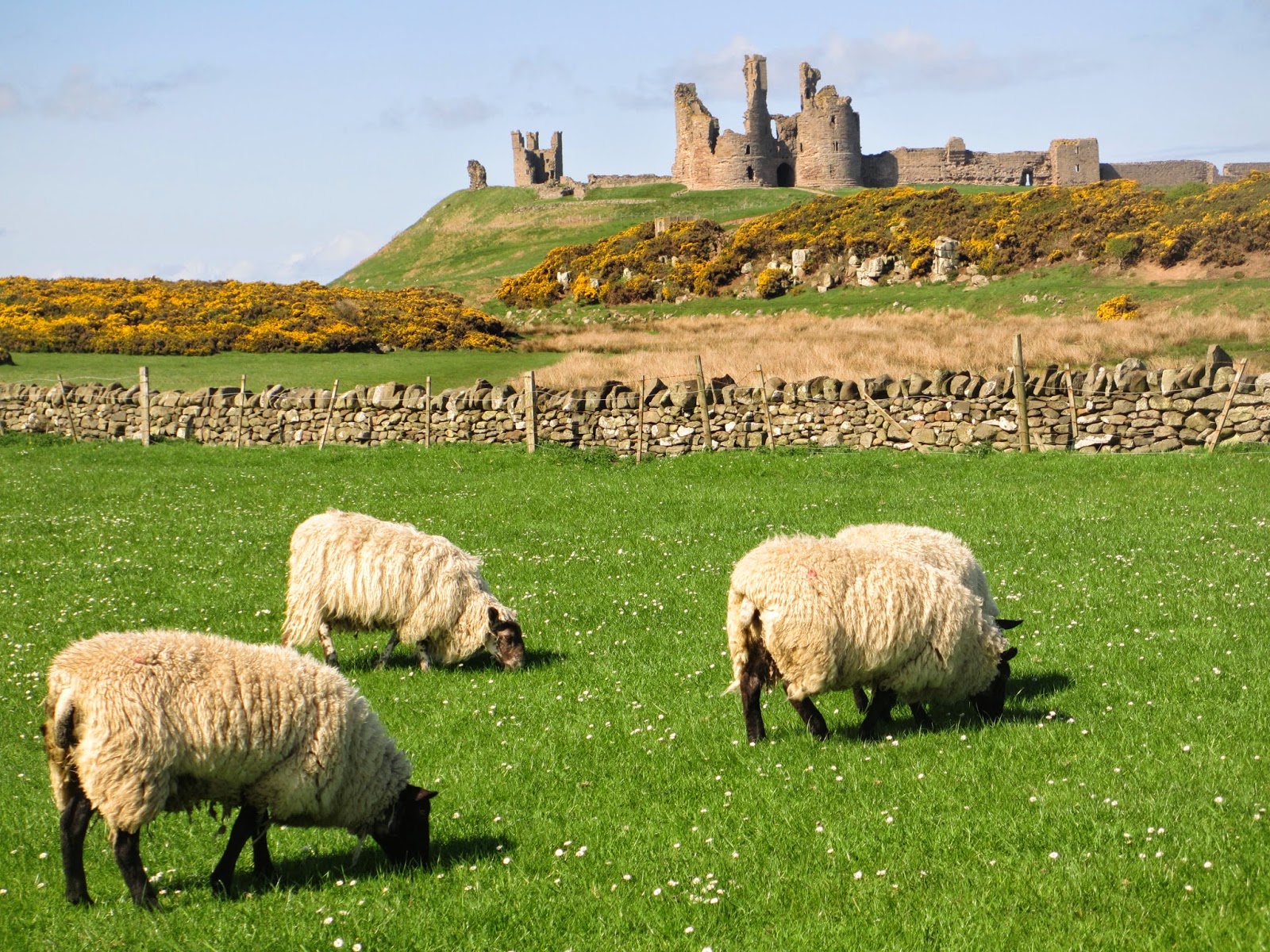 Where in England? London? This is the usual question I am asked when I announce my nationality. For many Canadians the words are interchangeable. Just try asking a Montrealer where exactly in Toronto they are from and this should give them something to think about.
Newcastle, I answer, It's in the NORTH. Blank looks. Where the beer comes from. Slight recognition. It' s actually beautiful countryside. (Canadian looks pityingly at me.)
(Starting to sound desperate now) There are sandy beaches and castles, lots of castles overlooking the sea. At this point the Canadian tries to politely change the subject and I feel I have yet again failed to convey how beautiful my homeland really is. (apart from the anti-social behaviour that is).

So in this post instead of writing about my expat life in Canada I thought I'd do a quick guide to my favourite haunts back home. For you Canadians. How to DO North-East England.

1.Dunstanburgh Castle, Craster, Northumberland (see above with sheep)
In order to visit the remains of this structure which dates back to the 14th century you must do two things. Do some sort of a walk  and eat crab sandwiches at the Jolly Fisherman pub. It is the law of England and no matter what the weather you must do both. (Try the crab and cream soup too and remember to buy some kippers or smoked mackerel pate over the road)

2. Barter Books
The finest second-hand bookstore in England where the original Keep Calm and Carry On poster was discovered. (That's it on the wall) It is housed in the gorgeous former railway station in Alnwick (the local castle is Hogwarts in the Harry Potter films). You can easily spend a day here looking through the dozens of bookshelves and enjoying a coffee in the converted railway waiting rooms (first, second and third class).


Any fool can go to a beach in the summer but the test of a true believer is to do a winter beach walk. It's cold, it's blustery but you get great exfoliation from the sand whipping into your face. There are a whole string of beaches up the North-East coastline (Bamburgh is another great one). Do them all but wrap up warm.

4. Simonside Hills
On a sunny day it does not get much better than this.  Staggering about in the wind on the tops of the Simonside Hills is a classic North-East experience. Sheltering in a sheep pen to eat your sandwiches is de rigueur.

Served with a teapot and bread and butter (the facecloth type of bread). A taste of home. Then do a bracing walk around Tynemouth Castle and Priory or venture onto the beach. (no really, we have GOLDEN beaches. Sounding desperate again)

Hardly set foot in the place when we lived round the corner but really this is a stunning Victorian park built in a steep valley in Jesmond, Newcastle by armaments manufacturer William Armstrong in the 1860s. You can round off a walk with afternoon tea at Jesmond Dene House Hotel if you are feeling rich. 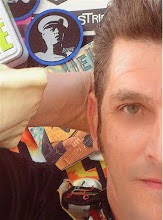 An essential quirky experience worth doing on any visit to Newcastle in which you sit in semi-darkness and listen to an album on vinyl - just like you used to do when you were young. Hosted by charismatic funny man Steve Drayton. Yes there is a bar but latecomers are not admitted so as not to spoil it for the record-listening public. No talking allowed. This is hardcore. 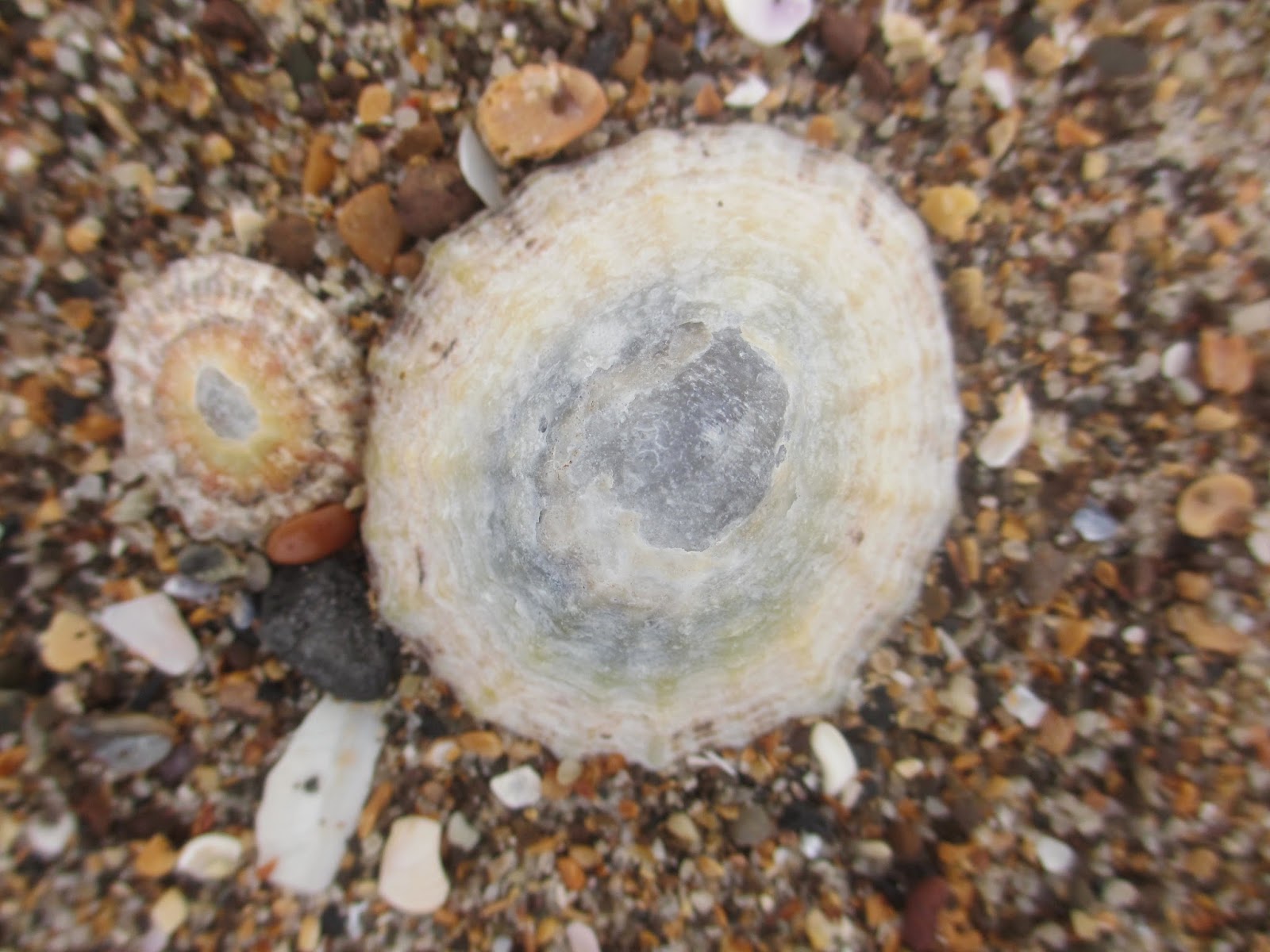 Just go there and you will be amazed. One of the best beaches anywhere. Did I mention it has a castle? 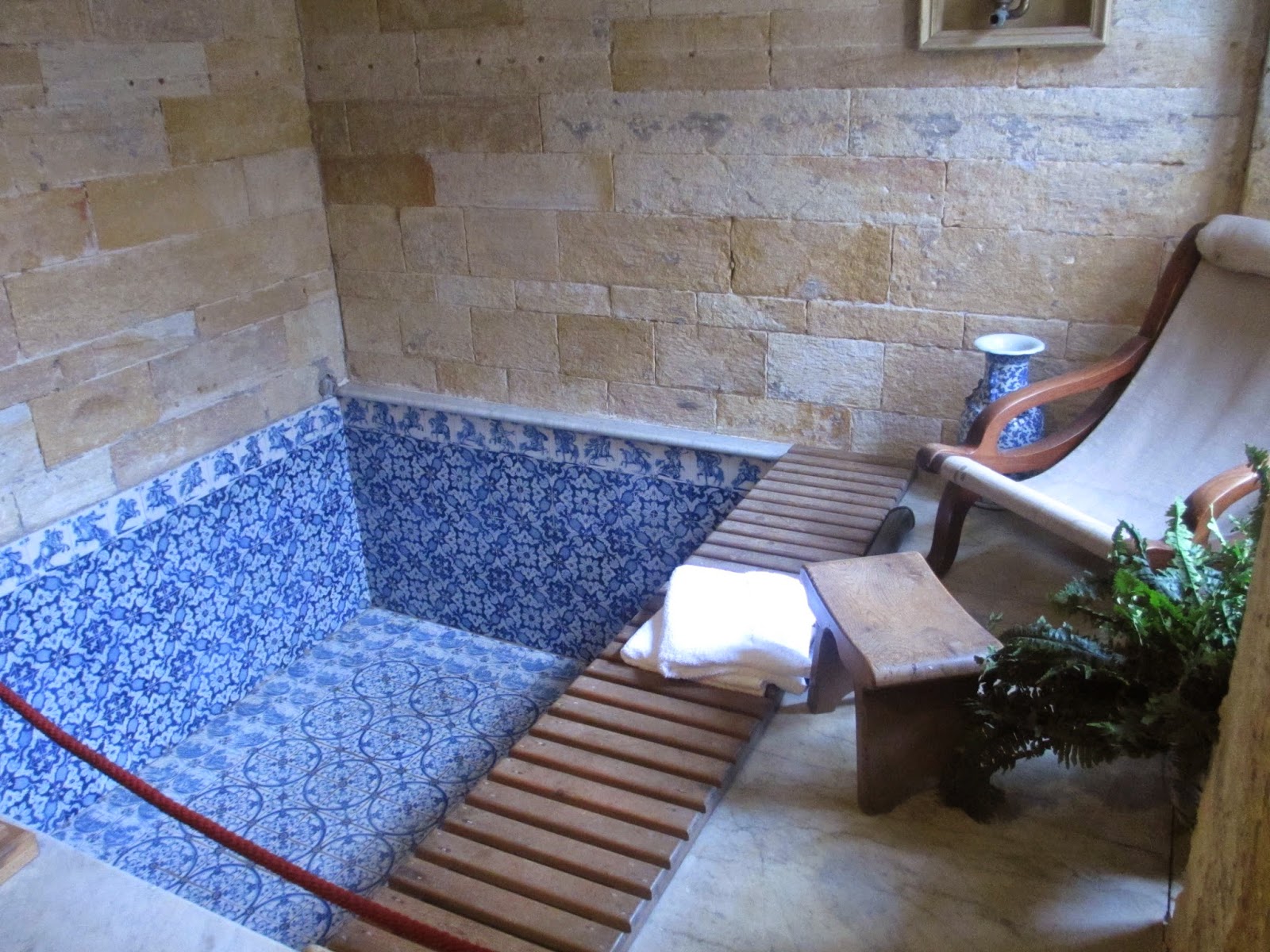 Another creation of William Armstrong. A stunning country house and parkland near Rothbury. The house is grand but on a human scale and my favourite room above features this plunge pool for cooling off on those hot summer nights in Northumberland (English humour alert). 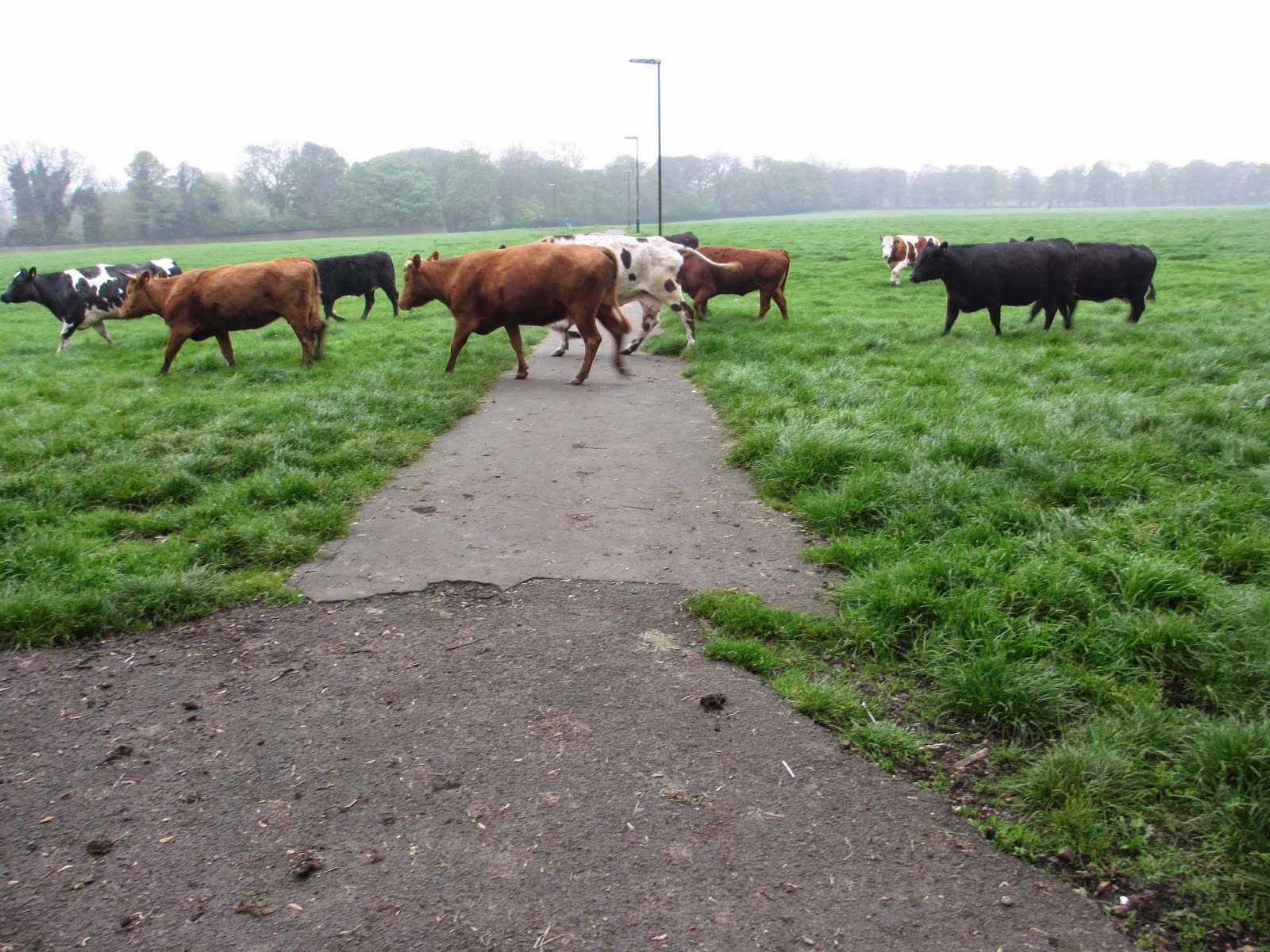 Cows in a city? How mad is that? Farmers bring the critters in from the countryside to hang out on the town moor - a huge stretch of green land - just for their summer holidays. For joggers, walkers and cyclists they form a pastoral backdrop as you make your way to the pub. Watch where you step. 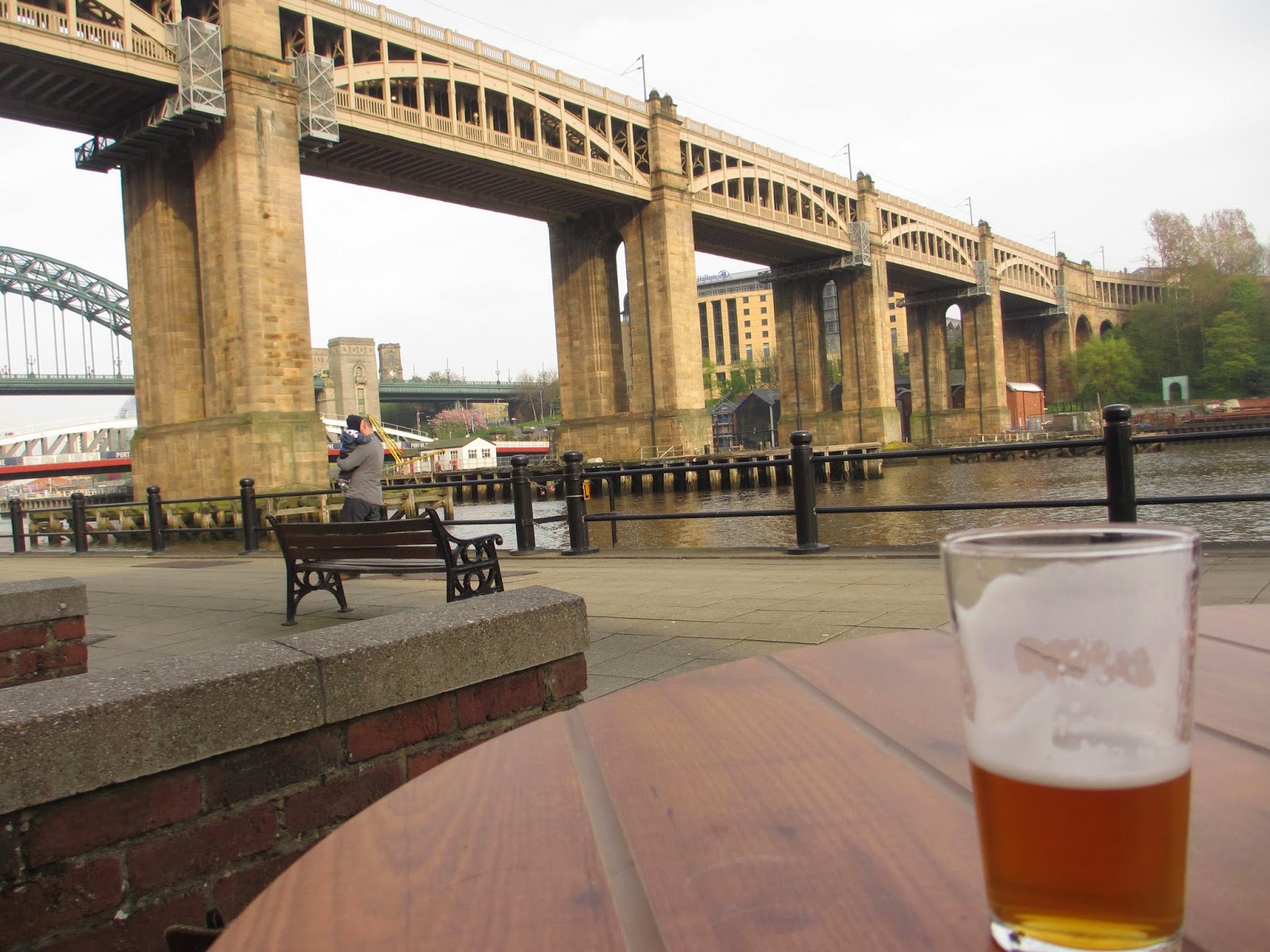 No not London, Newcastle. Where the beer comes from.
More on North East England here
Email Post
Labels: bamburgh Barter Books cragside Craster Dunstanburgh jesmond dene marshalls mr drayton's record player newcastle Northumberland simonside town moor warkworth
Anne Kostalas
"There are two things I love in life - travel and opera. Which is probably why I write a blog on each of those subjects. I'm a filmmaker, former BBC journalist, cottage dweller, gardener and cat lover. I make documentaries, profile videos of individuals and companies as well as trailers for productions and festivals. Check out my other blog Diva Films: My life as an operatic filmmaker and my website annekostalas.com. Follow @viewfromalake on instagram and twitter."