Niagara: from the sublime to the ridiculous 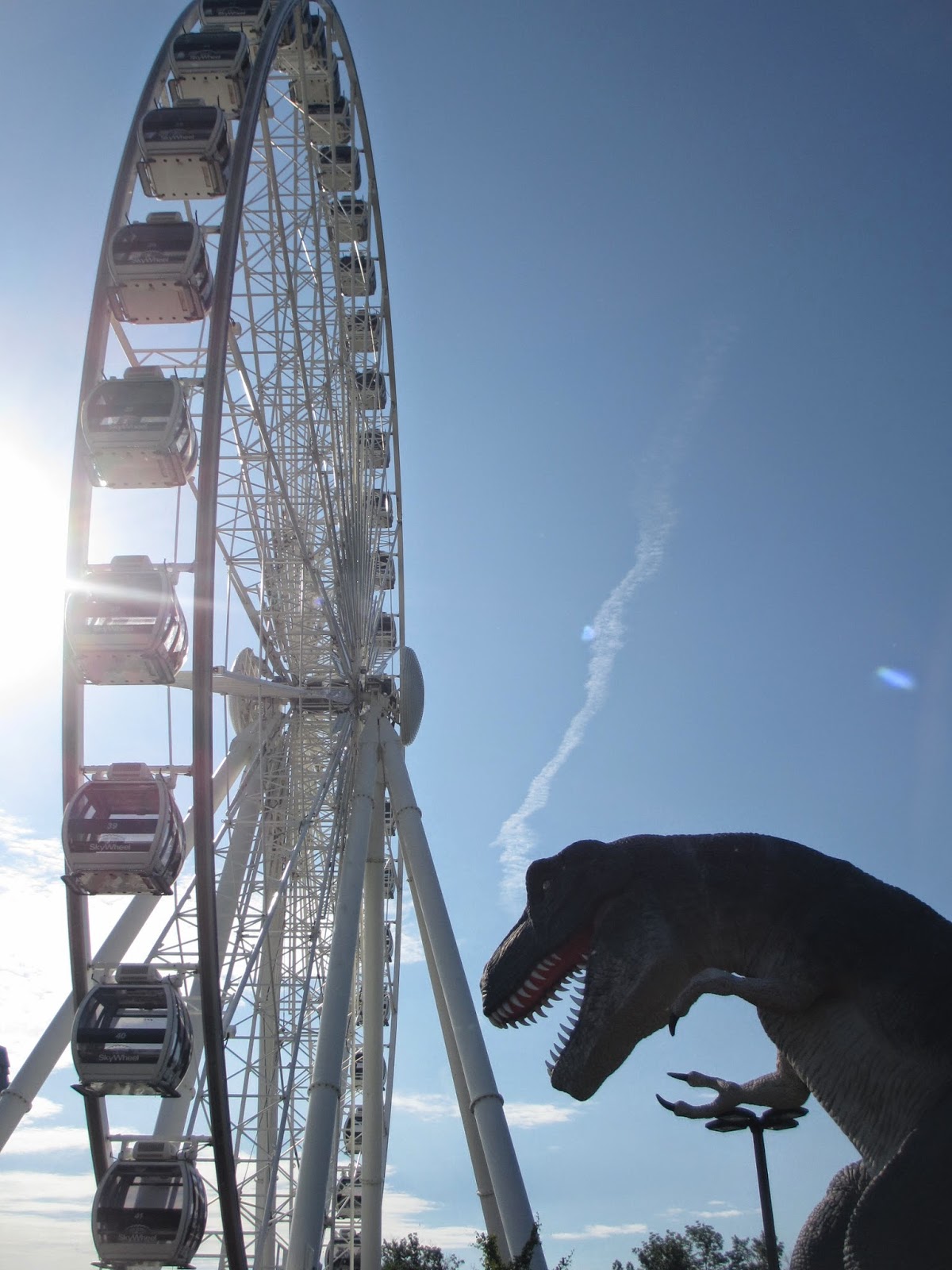 Here on the Niagara Peninsula you can be watching a George Bernard Shaw play one minute and playing pitch and put with dinosaurs the next. The cultural extremes of the Shaw Festival in Niagara-on-the-Lake and the tourist attractions at Niagara Falls, 20 minutes away,  are writ large. Yet to me they complement each other perfectly. We have moved location from the tasteful Pillar and Post Hotel ( a former peach canning plant) in NOTL where they place a rose on your pillow - to a room with a view at the Niagara Falls Hilton. Our new location is a bit like living in a theme park but our room is quiet and from it we look down on all the chaos in a strange air-conditioned silence. From my bed I can see the Skylon tower taking its carriages loaded with tourists to the observation deck 160 metres high . If I sit up in bed I can see the American falls crashing below. But the best view is at breakfast in the hotel's Watermark restaurant where both American and Canadian falls vie for your attention over your omelette. 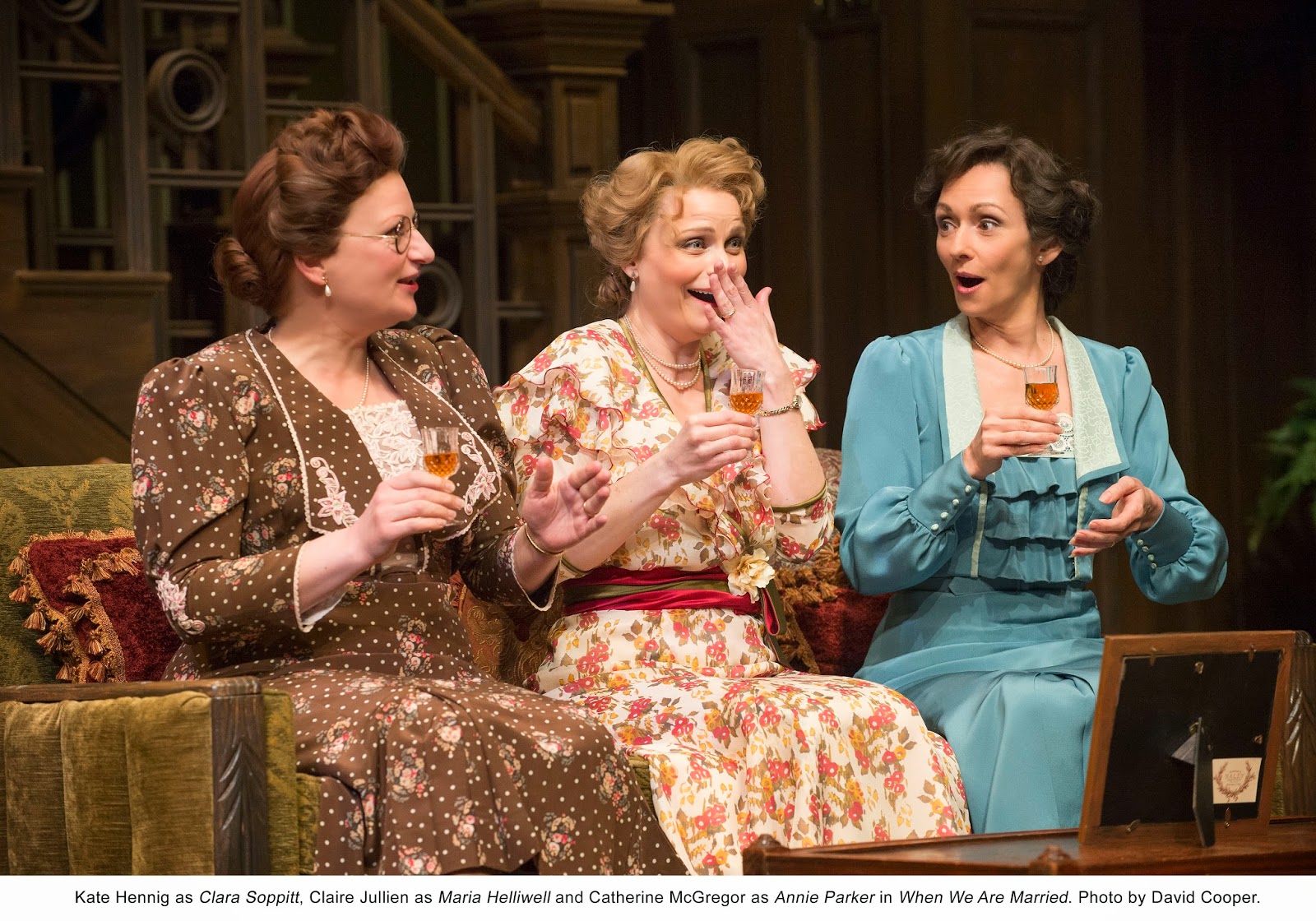 We leave the craziness of the Falls to go see another production in NOTL  The drive surprises me. One of the top tourist attractions in the world and we can get out of town in five minutes. The Niagara Parkway between the two towns is a delight - completely unspoiled and bordered by lush grassland and vineyards. We see the wonderful When We Are Married by JB Priestley, complete with Yorkshire accents - bizarre to a Northern lass from England to hear in Canada. Together with The Charity that began at Home this is one of my favourites. Laugh out loud funny and beautifully acted. Kate Hennig was hilarious as Clara Soppitt - the dominating wife of Herbert. She also killed in A Lovely Sunday for Creve Coeur - a 55 minute play by Tennessee Williams featuring four women which left many of us with damp eyes. But the best Yorkshire accent of the night went to audience favourite Jennifer Dzialoszynski as Ruby Birtle.


There is plenty of entertainment in Niagara Falls but it would be a mistake to think you have to spend  money to have fun. Walking along the river and enjoying the falls is free. We found as soon as we walked in either direction along the Niagara river the crowds soon dispersed and you could enjoy a peaceful stroll.  I wandered into the Secret Garden in front of the Sheraton Hotel. It was built in the 1930s and still retains the charm. With its manicured gardens and benches under box trees it is the perfect spot to sit and reflect while the crowds snap their pictures just a few minutes away.

We never did make it onto the Maid of the Mist or up the Skylon Tower for the views but it didn't matter. The atmosphere of celebration here is infectious and it is quite something to wander along the promenade and not only take in the Falls but the visitors too. There is an excitement in the air and it isn't just generated by cash registers. These waterfalls have been captivating tourists for generations and although the falls are eroding with time and some say in 2000 years will no longer be here - for now they are very present. Fourteen million visitors a year cannot be wrong.

Rainbows are a constant on the water which has the highest flow rate of any in the world draining Lake Erie into Lake Ontario. More than six millions cubic feet of water falls every minute in high flow. Many are higher but it is the width of the falls which is so impressive. Formed by glaciation they now mark the border between Canada and the States (Ontario and New York State). The falls became a visitor attraction as early as the 18th century.


We are seeing seven productions in four days at the Shaw (one musical and six plays) and just like last year we have not been disappointed. Artistic director Jackie Maxwell tells us you don't have to be a millionaire to visit the Shaw. She's right. We eat well one night at Grill on King (mahi mahi and roast vegetables, prawn risotto, glass of wine each and shared dessert came to $50) but the next we go for an excellent $10 freshly made pizza in an ice cream store. There are cheaper options to be found here. We hear Treadwells wine bar does a great cheese plate and at the Stone Road Grille you can get several main courses under $20.
We overhear a man in the audience at a play say he stays at the Falls and drives to NOTL to save money. Many of the hotels and B&Bs do special deals . Sixty five actors make up the Shaw Festival team and each play two parts. Four thousand hopefuls send resumes every year. There are deals to be had on theatre tickets too - for groups and the under 30s. We leave the theatre late and drive the quiet Niagara Parkway back to the Falls. It seems alive with activity but we crash into bed with a brief glance out of our seventeenth floor bedroom dreaming of English manners and Yorkshire accents.


Read my next post on cycling in the Niagara wineries ......hic.


Read previous post on the Shaw Festival and Niagara-on-the-Lake.

Email Post
Labels: Niagara Falls Niagara-on-the-Lake Shaw Festival
Anne Kostalas
"There are two things I love in life - travel and opera. Which is probably why I write a blog on each of those subjects. I'm a filmmaker, former BBC journalist, cottage dweller, gardener and cat lover. I make documentaries, profile videos of individuals and companies as well as trailers for productions and festivals. Check out my other blog Diva Films: My life as an operatic filmmaker and my website annekostalas.com. Follow @viewfromalake on instagram and twitter."