Tattoos, kites and a candy church.

We are bobbing in the sea and laughing - the salt water is so buoyant here at Miscou beach. The water is warm and a pleasant change from the chilly waters of our lake back in Quebec. I feel as if I am going to pop out of the water it is so easy to float on your back here. A long boardwalk takes us down to the water where dozens of families are hanging out. Basque fishermen visited this island back in the 1400s and it is claimed mass was celebrated here as part of Jacques Cartier’s exploratory visit to the New World in 1534.

Miscou lighthouse is at the most northerly tip of the island, between the Baie-des-Chaleurs (the warm side) and Gulf of the Saint Lawrence (the cold side). It was built in 1856 by James Murray from Newcastle but has been moved inland several times due to erosion. At La Terrasse à Steve, just over the bridge between Lamèque and Miscou,  Steve will show you his tattoo and happily pose for a picture. Then he takes you to look at his photographs, which on a day with a high of 33C seem somewhat unbelievable. There he is kayaking between icebergs with Miscou lighthouse in the distance.

His German Shepherd dog, Bear, is on the kayak with him in some of the photos. Bear is currently lying next to our our table, looking a little worn out after a swim. The restaurant is a real seafood shack, with a fish store attached. 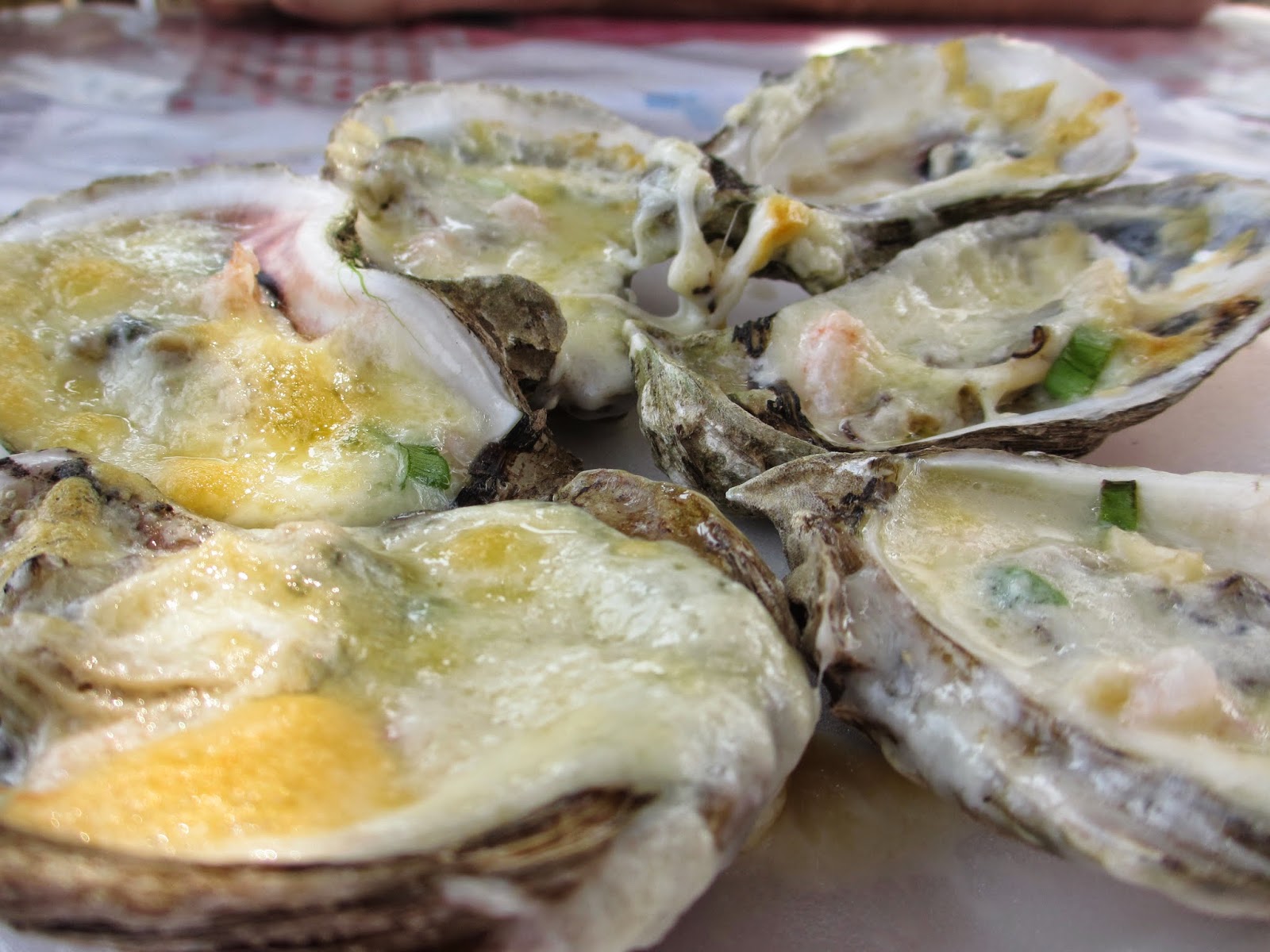 We sit in a rustic booth next to the water. bordered on one side by lobster pots and order the stuffed oysters and scallops and shrimp skewer for lunch. Good food and reasonably priced too. We buy two cooked lobsters to take home for dinner.

A young sunkissed kiteboarder tells us this blustery day is nothing - "You should have seen it last week. " We are at the Club Wind and Kite kiteboarding school in Petite Lamèque. The shallow, warm lagoons here combined with high winds, make it an ideal spot and it is known across Canada for the sport. We go to watch and start to see why. When you fall in the water you are able to stand up easily it is so shallow.  One enthusiast tells us there are different sized kites for different conditions. It is spectacular to watch. It has all the thrill of windsurfing but then the surfer takes off, twists in midair suspended by the kite, and then lands back on his board on the water.

Back at our chalet on Pointe Alexandre I see a man picking something on the edge of the woods. As he pops it into his mouth I ask what it is. “Bluets,” he replies. Sure enough wild blueberries form a carpet all around and I pick some myself. There are 26 different wild fruits growing on the islands of Lamèque and Miscou including dwarf huckleberries, something called skunk current, cloudberries and small cranberries. Four million pounds of blueberries are 2.2 million pounds of cranberries are harvested here every year. 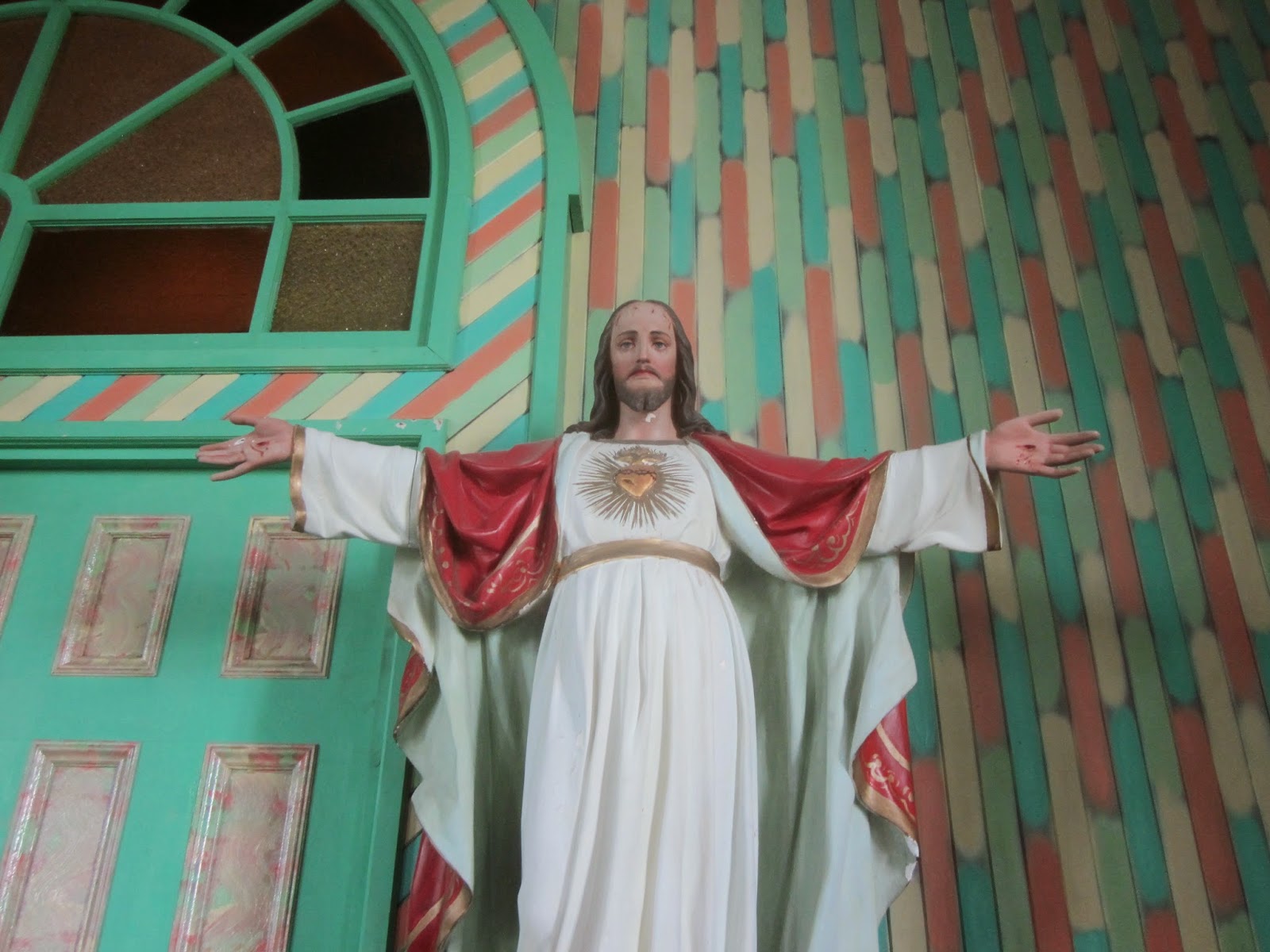 We wander into what is known locally as the Candy Church (Sainte-Cècile Church) because of the folk-art decoration there. A group of construction workers, covered in dust, are all taking photographs on their cellphones. One tells us, “I have lived here all my life and always wanted to come in here.” It is quite a touching moment. Tonight the church hosts the start of the Lamèque International Baroque Music Festival, the oldest of its kind in Canada. The curious decoration was painted by the priest here in 1969, Reverend Gérard D’Astous.  I’m making a video about the festival while I am here, for their 40th anniversary next year.
After dinner we build a bonfire and toast marshmallows, listening to the crashing waves on the beach behind us. As I blow the flames off my ignited confection and gaze up at a clear starry sky I know that I will sleep well.

Email Post
Labels: La terrasse a steve Lamèque Miscou island New Brunswick
Anne Kostalas
"There are two things I love in life - travel and opera. Which is probably why I write a blog on each of those subjects. I'm a filmmaker, former BBC journalist, cottage dweller, gardener and cat lover. I make documentaries, profile videos of individuals and companies as well as trailers for productions and festivals. Check out my other blog Diva Films: My life as an operatic filmmaker and my website annekostalas.com. Follow @viewfromalake on instagram and twitter."